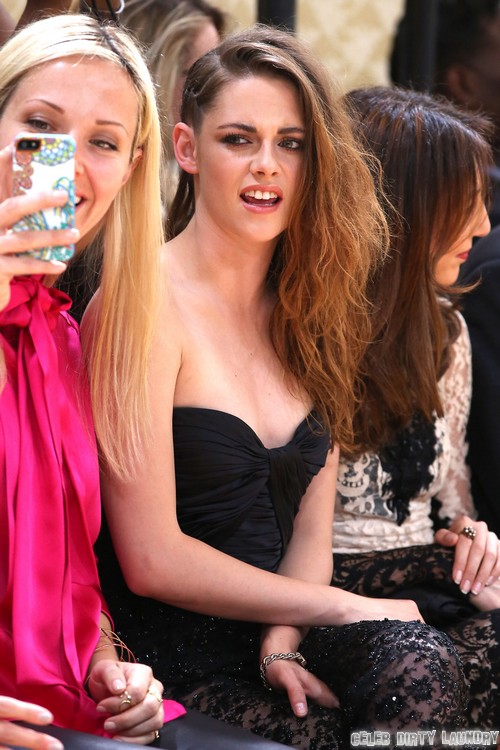 Kristen Stewart has decided to leave her reclusive ways to her character, Bella Swan in the Twilight Saga. Celebrities used to have privacy and that created allure, but this is not the old days, and Kristen is not Elizabeth Taylor (yet). This is a Kardashians world, so over exposure is the way to garner headlines. Fans want to know what you’re eating, what you’re wearing, where you are, who you’re listening to, and how many times you use the bathroom – all via twitter and Instagram. Just ask Rhianna.

The pale thin Twilight germophobe (ish) beauty pretended to enjoy interacting with people recently, although she’s admitted to hating fame. Being a true celebrity takes a lot more than pure talent these days. It’s all about creating a brand, and it’s obvious that someone told the Trampire to get over herself.

The grungy twilight queen stunned a crowd As she arrived for the Zuhair Murad show during Paris Fashion Week wearing a see-through jumpsuit putting that cock on the block. She posed for the cameras, and even smiled – with some difficulty. After Kristen Stewart was caught cheating on Robert Pattinson with her Snow White and the Huntsman director Rupert Sanders, the Twilight façade was ruined forever. Any sane person knew Kristen and Robert Pattison would not last. Riley Keough should not allow Twi-Hards to discourage getting bitten by Edward. He is vulnerable and heartbroken.

While it’s certain that fame can get overwhelming, and cause a celebrity to put a #ChrisBrownBeatDown on a thirsty paparazzi, they choose to open their lives to the public for their own branding growth and profit – it is a business to them and their PR team – they are not being ‘nice and friendly’ – they using the media (who gleefully cooperate) to promote their careers. We make them famous.

So celebs, especially those without an abundance of true talent, know the drill – expose your breast on twitter like Leann Rimes, or slap your resume on careerbuilder.com like the rest of us. Open up, or end up like Heather Locklear… your choice.