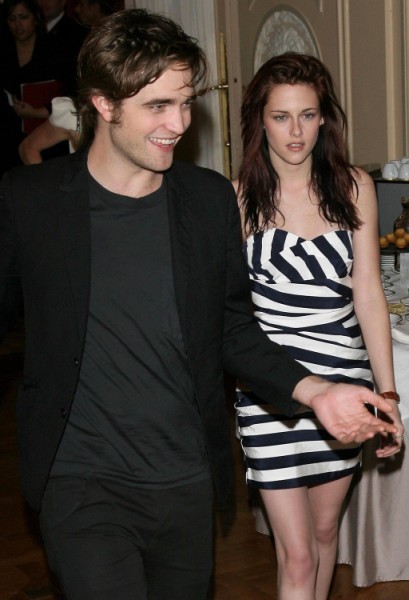 Hanson just won’t quit. The amazing band just released the first song off its latest album, Anthem, and was out to celebrate at the bar No Vacancy at Hotel Juniper on what just so happened to be Kristen Stewart’s 23rd birthday on Tuesday night. And guess what awesomeness ensued? Robert Pattinson and Kristen Stewart crashed the party because they apparently were looking for a MMMbop’n good time and just won’t quit their love either!

According to E! News Rob and Kristen actually stumbled upon the release party by accident while out celebrating with a group of friends. “They weren’t overly affectionate or anything, but at points they were standing together as they talked to friends,” a source said. They got there around 11 p.m. and were still hanging with a dozen or so others well after 1 p.m.

I hope they appreciated the fact that they were in the presence of Hanson. I could see Kristen thinking she was too cool for the trio but I like to think Robert could appreciate the music. You want to know what’s odd though? Nikki Reed was also at the party with husband, Paul McDonald, but it doesn’t sound like she was with Rob and Kristen. She posted a pic of herself with Taylor Hanson. You’ll remember that Nikki and Kristen reportedly had a falling out after Kristen stole Rob from her after the first Twilight film. That’s the rumor anyway. Nikki seems super happy now and has moved on but their relationship clearly did not rebound. Apparently Nikki’s not in to forgiveness like Rob is! But still… they had to have said hello, right? How could you be at the same club and ignore one another. You can play the “I didn’t see you” card but everyone there would have told them their co-star was hanging at the same bar. Could you see Rob shunning Nikki because his girlfriend isn’t getting along with her?