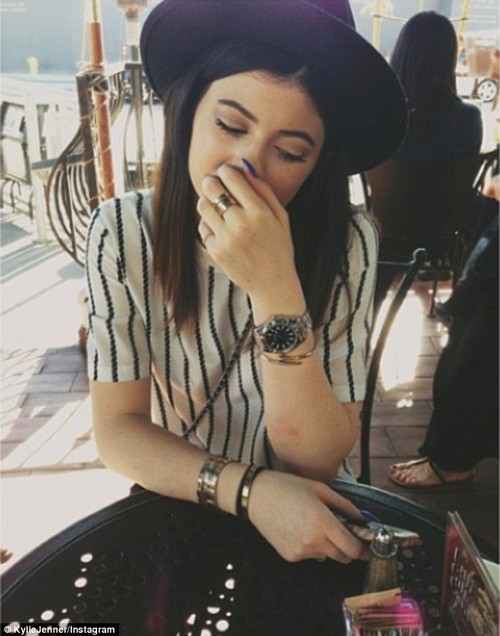 Being part of the Kardashian family means being able to keep up appearances at all costs and at all times. Behind the scenes the empire is slowly beginning to crumble with divorces, merch that isn’t selling, and reality show ratings dropping significantly. Kris Jenner still expects her family to hold it together even if it means pretending that all is well when it obviously isn’t. Kylie Jenner continues to pop up all over the place and has been actively posting photos through the holiday season of herself all glammed up. Girlfriend’s make up and hair might be perfect but she is clearly not happy.

Sources close to Kylie say that she is deeply upset about her parents divorce. She has always been very close to her dad, Bruce Jenner and now that he has left the family’s mansion he isn’t able to be a daily force keeping the family grounded and that is something that Kylie obviously misses. Instead she is living in the middle of Kardashian dysfunction complete with baby Nori who is only marched out for photo ops. While Kylie was born into this crazy family she is the one who would prefer to live a normal life, something that Kris Jenner is incapable encouraging.

Watching her mother flaunt her cougar stripes by making it known that she is banging former Bachelor, Ben Flajnik isn’t helping either. Kylie loves her father and is totally disgusted by her mother’s behavior. How do you think Kylie is going to ultimately get through this rough patch? Will she fall into line like a good Kardashian girl or is she maybe turning to a rough crowd of friends to help her get by? Those close to Kylie fear that she could end up like Lindsay Lohan. Do you think there is reason for that type of concern? Tell us your thoughts in the comments below!