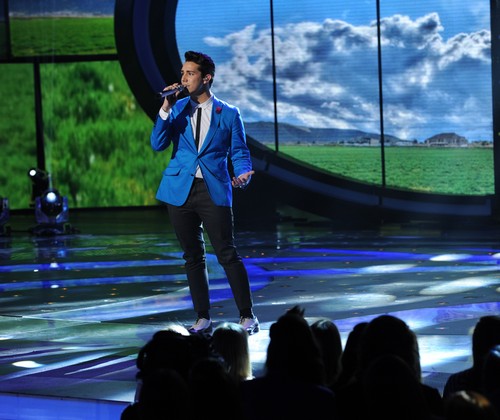 Cuban born 21-year-old Lazaro Arbos, who speaks with a severe stutter but sings like an angel had his dream cut short tonight.   Lazaro who was a front runner from the beginning, amazing judges and America with his angelic voice but sadly, his Idol dream has come to an end and he was sent home tonight.   Did you watch tonight’s show?  We did and we recapped it here for you.

Lazaro auditioned in Chicago, Illinois with the song “Bridge over Troubled Water” and surprised the judges because he didn’t sing with a stutter.  In the semi-finals, Arbos performed “Feeling Good” by Cy Grant.

The judges had this to say about Lazaro’s rendition of The Carpenter’s song “Close To You” last night:  Randy said, “he was speechless. He loves Lazaro the person and he’s inspirational to all of them, but it was horrible. That was the worst performance he’s had the show.” Mariah said, “there’s no denying that he’s beyond courageous, but there cannot be a key change — they can’t go into one key and he’s in another key.”  Keith said “they are honoring his story, but when you choose a key and it’s way too low for him. A key change comes and then he didn’t catch it until later.”  Nicki didn’t want to offer her opinion at all.

Sound off your comments below and tells us what you think about Lazaro’s Idol experience.  Do you think you Lazaro should have been sent home?