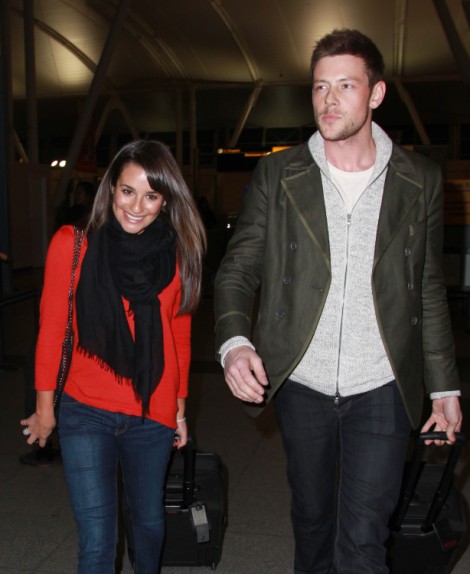 I don’t watch Glee. Never have but I know a lot of you out there are obsessed with the show and the real life romance between Lea Michele and Cory Monteith. They managed to keep it hidden for awhile but ever since they came out over a year ago they’ve not been shy about walking red carpets and being seen in public holding hands which is kinda sweet. They’re no Brangelina but there is a demand for the pics and they’re no assholes about it so generally I’ve not despised this couple. She seems a little famewhorey and hungry but he’s got the most beautiful baby face in the world so that cancels out. That’s why I was so shocked to hear about rehab. Cory Monteith announced that he’s going back to rehab for substance abuse addiction. That’s right – going back. Apparently he went when he was 19 for the same issues. He’s 30 now. This isn’t crazy news because I guess he’s always been forthright about that information and never shied away from letting people know about his past issues. He seems to be taking that approach now as well.

Cory’s already issued a statement and even got Lea to issue one as well. They’re handing the story before the media can run wild with and it’s working. Lea Michele’s reaction is short and to the point. Her man is dealing with shit and she’s sticking by him. Case closed. “I love and support Cory and will stand by him through this. I am grateful and proud he made this decision,” she told People magazine. Giving a statement to People is a lot different then just tweeting it. That says something. It’s a major orchestrated move. Cory Monteith’s girlfriend was going to nip the rumors in the bud before they got out of hand. Usually when something like this goes down you’ll have the obligatory break up/wild sex crazed binge stories. There always has to be a motive. What drove Cory to rehab? Did he hit bottom? What was that? Did Lea force him? Was there an ultimatum? We’ll always look for the dirt. But they’ve both come out strong. No dirt. Only love. Everyone convinced? Is this just the calm before the storm?