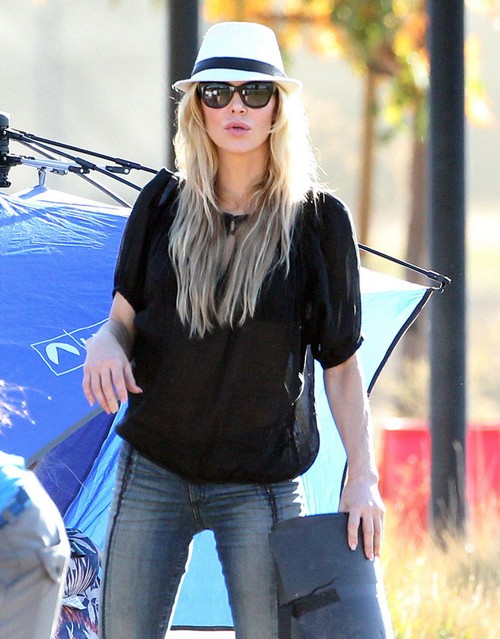 LeAnn Rimes latest attention seeking ways have taken a turned for the truly pathetic. Her husband Eddie Cibrian’s ex-wife Brandi Glanville is currently engaged in a Real Housewives catfight with Joanna Krupa. What does this after to do with LeAnn – absolutely nothing – but that didn’t stop her getting involved because with LeAnn there is no such thing as taking the high road even if it does cost her her career, marriage, and the respect of her two stepsons.

It began when Joanna was photographed wearing a Team Rimes shirt to spite Brandi. LeAnn supporters were ever so happy so they tweeted her about how great the shirt was and instead of keeping quiet, LeAnn responded proving that her husband was right when asked about his current wife always feuding on Twitter and he said, “Look, I think there are some people who are just kind of born to create drama and then capitalize on it.” You are absolutely right Eddie and your wife is one of them. Here she is trying to capitalize on drama that had nothing to do with her, ‘cause she is so classy like that: 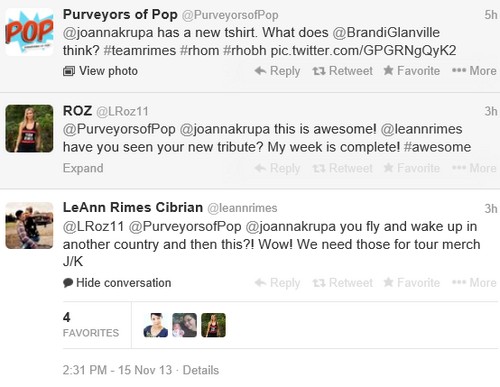 Even when she attempted to backtrack she still had to get in here there how awesome she thought Joanna doing this was, “sorry, I’m just saying I’d rather sing no dramazzzzz but cute shirt :)” Then the has-been singer who recently tweeted Fruit of the Loom asking for an endorsement seems to be really desperate to find ways to make money because she wrote to a fan, “thx! We’ll make our own “Team LeAnn” shirts for my fans and it will be associated w/ my music. Want to do it for years.” Hey LeAnn maybe Fruit of the Loom can make those shirts for you … oohh never mind they probably want to stay in business and right now everything you touch turns to …. well let’s just say it is four letters and no it is NOT gold.

All joking aside who is advising LeAnn these days!?! Although LeAnn doesn’t need a PR agent as much as she needs a babysitter 24/7 who okays her tweets, because with every tweet we get to see more of her truth and the less she is liked. She knows exactly what Team LeAnn or Team Rimes stands for and it has nothing to do with her music but everything to do with her hatred for Brandi. Time to grow up Ms. Rimes if not for yourself but maybe for your two stepsons you claim to love so much. At this point I can’t help but wonder if the damage is done. Everyone likes a great comeback story but at some point there is no coming back and LeAnn is right there.

If anyone really cared about LeAnn they would sit her down and have her reevaluate the last few years of her life and where HER actions have led  – unemployed with no record deal. Her last two records flopped … big time … and she is no longer part of the successful country music scene. It is time she stop using Brandi to keep herself in the spotlight, and start trying to find her way back from the mess that has become her life and her career. Truth.