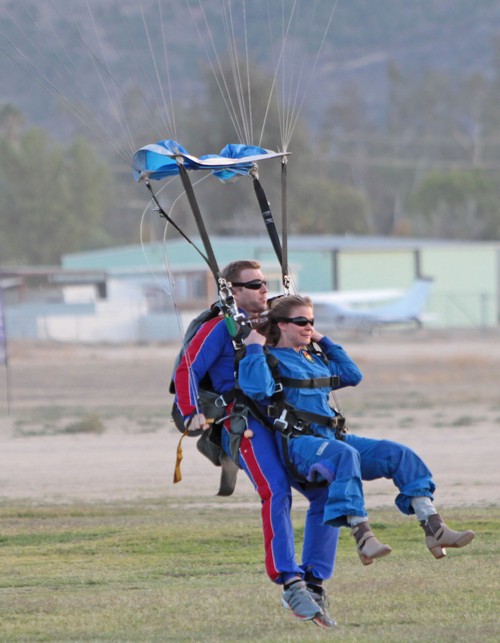 On Veterans Day LeAnn Rimes and Eddie Cibrian co-hosted the “Wings of Inspiration,” event put on by Skydive Elsinore, along with Mario Lopez. True to form the couple made the day less about the wounded veterans and more about themselves by making it the LeAnn and Eddie show – literally – by bringing along cameras to do some taping for their entirely scripted show. Also if you check LeAnn’s Twitter timeline that day, unlike Mario who tweeted pictures with some of the wounded warriors in attendance, she only tweeted about her and Eddie and a picture of her landing. Nice one LeAnn.

At the event LeAnn and Eddie sat down with Mario to tape a really fake segment for Extra. I am not going to talk that much about what LeAnn had to say during the interview because per usual she just flailed her hands around in a failed attempt to distract us from her inability to articulate. Eddie on the other hand did a quite a bit of talking. Seems ole Eddie is no longer living with a tape over his mouth and is starting to slowly speak freely – which I doubt LeAnn is happy about. It was just a week ago that when speaking with Entertainment Tonight about divorce rumors that he deviated away from his given script to say, “We have such a great marriage, very functional and we just decided to do a show to screw that all up.” That my Celeb Dirty Laundry friends is what I call truth in sarcasm. They didn’t ask him about his scripted show and how it has impacted his marriage – he brought it up on his own when asked about the general state of his marriage.

During the sit down that he and LeAnn did with Mario I found his answers to be very telling. When Mario asked about the article in Star that revealed so many awful things like the fact that LeAnn is a drunk psycho who stalks Brandi from the inside of her closet, and Eddie regrets ever marrying her, this is the rumor he chose to dispel: “It was just so ludicrous … it said something to the effect like I would text Brandi all the time whenever Leann and I are having a fight or something like that, and you know, that’s not true.”

Ok so out of all the of all the “rumors” (see LeAnn I can use scare quotes too), he chose to clear up and deny the one about texting Brandi Glanville, even though Brandi herself already went on the record saying that is not true just a few days ago. It seems that instead of using this opportunity to support his wife and tell us how she is so wonderful and not at all a drunk stalking psycho, he decided to use it as a way to placate the other woman in his life –his mistress.

Rumors that Eddie has been cheating on LeAnn are not new, but they have intensified lately. Recently there are murmurs that he is really into one particular actress and I think she read the Star write up and believed that Eddie was texting Brandi because the rest of the article had truth in it. She was probably upset and confronted him and he was all, “no baby I was texting you not Brandi you know you are the only one that matters.” And to further prove it to her he used this opportunity to publicly deny that he texts Brandi. Oh and note to said mistress he tells all his girls that they are the only one that matters, but LeAnn was the only one dumb enough to get it tattooed on her. Just thought you should know.

Poor LeAnn bless her heart was left to defend herself saying that she was offended by the fact that Star wrote that she, “locks herself in closets when [she is] drunk,” saying, “I don’t do that.” Although she meant to say, “I don’t do that … much. Not since the night I trashed my closet and puked all over the bikinis I no longer fit.” Throughout her denial Eddie just sat there with his big grin, while LeAnn kept looking at him to jump in and back her up, but he never did. Nope he just kept right on grinning.

The rest of the interview was filled with baby talk where they seemed totally out of sync. LeAnn was like, “we work on if often,” (*gags* sorry I just puked a little in mouth); LeAnn just stop you are embarrassing yourself. She went on to say that since she is currently without a label, and therefore without a career she doesn’t want a baby now but she thinks about it all the time. Eddie jumped in saying, “She wants a little girl badly,” and the look on his face was in one word – priceless. Let’s just say he wasn’t grinning anymore. Perhaps it is because he is terrified at the thought of having a little Phyllis Diller, after all he did tell LeAnn at the skydiving event, “look at your hair you look like Phyllis Diller.” Ouch … for Phyllis Diller that is. Wonder what the late comedian would have to say about all this.