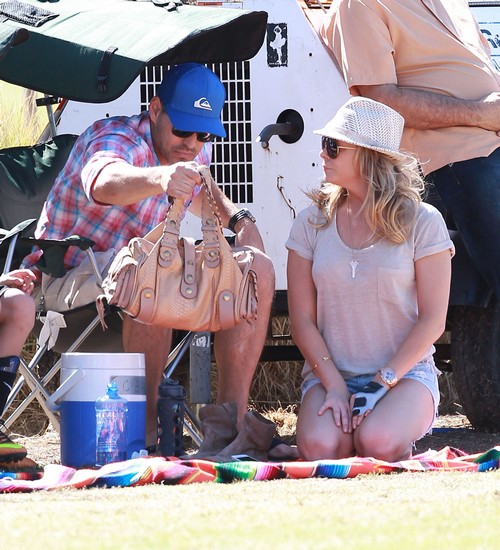 LeAnn Rimes, who has been allegedly struggling as of late with her drinking problem, now has even more reasons to hit the bottle because the truth about her and her life is coming to the surface and there is little anyone around her can do to stop it. Eddie Cibrian wants to leave her but can’t until they rap up LeAnn’s latest disaster – the entirely scripted “reality” show they are filming for VH1.

Eddie who married LeAnn after Brandi Glanville kicked him out did it solely for the Benjamins, but back then LeAnn had a lid on her crazy and he never expected that he would end up as her babysitter and prisoner. He just figured he could have access to her big bank account by sleeping with her once a month in a really dark room with his eyes squeezed shut.

It didn’t take long for Eddie to learn that when you marry for money you soon earn your keep. He has aged drastically since their marriage, and the happiest he has looked was this past September when she was off in Europe cancelling concerts because she was too hung over, and breaking her hand when she dropped a weight on it. One major reason for the grin he was seen sporting is that while psycho wifey was away he was finally able to have a heart to heart with Brandi who he has never gotten over. He used this rare moment alone to beg his New York Times Best Selling Author ex for forgiveness, and even confessed that life with his new ATM love is horrible.

According to Just Say Jenn! – who in my humble opinion is totally fricken awesome – LeAnn has been having one bad day after another; which is really just her plethora of bad karma catching up to her.

First off her music career is dead in the water. Her last album was more shitfire than Spitfire and she is desperate for a comeback. She is hoping that at least one song on that atrocious album will be a hit but it takes more than a good set of lungs to make a hit. Not helping the situation is that no radio stations will play her songs because the quickest way to get your audience to switch the station is to play one of her tunes. Yes, people hate LeAnn Rimes.

The nail in the coffin that is her career is that at the point where her record company is unwilling to shell out any more money on her because she no longer is able to generate sales or musical interest. You don’t have to have a degree in economics to know that spending more money than you are making on a commodity is just bad business. But before you go and start feeling sad for desperate Rimes remember that this is the same record company that she sued back in 2000 in a fruitless attempt to have her recording contract nullified, despite the fact that they gave her her big break. Now they are more than willing to let her go. That is what I call poetic justice.

Speaking of suing her record company is just one of many frivolous lawsuits that have been filed on LeAnn’s behalf. In 1998 she sued her own father and showed us the first signs of her emotional instability when she not so subtly mouthed, “I hate you,” to him in open court. She has also sued her Dentist blaming her messed up grill for her inability to perform. As if it was his fault she is ugly as sin and too scared to leave Eddie alone for even a second to actually do her job – perform.

In what is quite possibly her most frivolous and mean spirited lawsuit to date she is suing a special education teacher Kim Smiley and her daughter Lexi Smiley who SHE called in a PUBLIC restaurant and cussed out over SPEAKERPHONE, but claims invaded her privacy. The real reason she is upset is that she lied to Eddie about that phone call – because it is weird for a celeb, even a pseudo one, to call regular Joes because they tweeted something nice about your husband’s ex – and is embarrassed that it exposed her for the bully and classless person that she is.

Her other project is a scripted reality show with her future ex-husband Eddie, but rumor has it that her frequent episodes of intense anger and irritability continue to put production at risk. The network is regretting ever starting this project and everyone just wants it to be done.

Adding to her mental breakdown is the realization that she is used to being in a place of power and control over those around her, but has now become a liability. Eddie thought marrying LeAnn would help his D list career but it has actually hindered it. He has two possible projects in the pipeline and he isn’t willing to lose them because of her. Also telling of her diminished star status is that she and Brandi have about the same number of twitter followers, and unlike LeAnn, Brandi didn’t buy most of hers.

Speaking of twitter her emotional instability is painfully evident by looking at her feed. What she doesn’t seem to get is that by spending every waken moment on twitter trying to convince us she is happy the more we realize that she has no personal or professional life. You simply can’t post every minute of the day and be leading a productive life. Fact. Furthermore happy people do not feel the need to constantly say how happy they are, and happy celebrities do not get into random twitter wars with regular people. For example (and there are many) the other day LeAnn posted a picture of her hand splint, the next day she posted a picture of her doing all kinds of things that are impossible with a broken hand and no hand splint so someone called her out on it and of course she had to engage:

@leannrimes Where’s the splint and brace that was fitted for half a day? LMAO !!!!! The one for the fake broken fingers? That one?

Thing is that person had a point if her hand is indeed broken and this is supposed to be her and Eddie’s way to show us their reality then why couldn’t she wear her splint? Can’t say I am surprised though because this chick is the epitome of all that is irrational and senseless.

If she wasn’t such an uber bitch who is constantly tormenting Brandi by trying to lay claim to Mason and Jake, and trying to ruin a special education teacher’s livelihood I could almost feel sorry for her. I say this because it has got to suck to know that you bought your husband and that as soon as the checks begin to bounce he is gone. It is also hard to be in an industry that focuses on external beauty – something LeAnn was not born with, which is just my nice way of saying she is ugly. Sure girl can yodel but that is where her talent ends.

My better judgment tells me to just stop writing about LeAnn because it is a losing battle – you can’t rationalize with the irrational. But she just makes it too damn easy and quite frankly it is just too damn fun. In fact I believe that I am owed a thank you – along with anyone else on twitter or any blog that even gives her the time of day because we are the only thing keeping her relevant. It certainly isn’t her career.

Oh and in a very much related note I just read the most interesting article on Borderline Personality Disorder – might want to check it out Ms. Rimes.