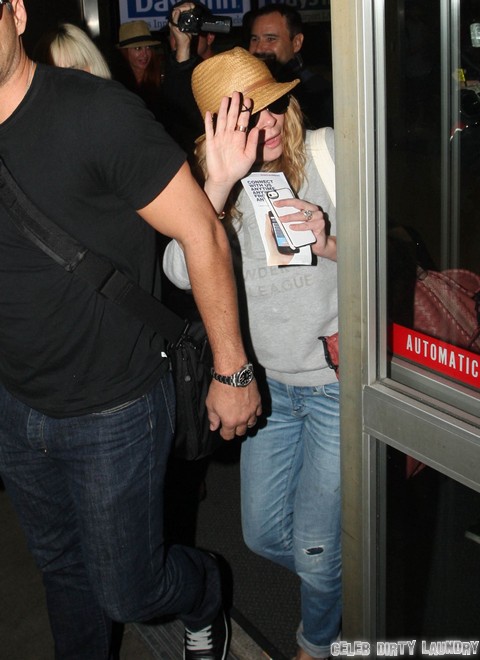 It looks like Brandi Glanville really is getting the last laugh here. Her book dropped this week and much of it is a tell-all that focuses on how LeAnn Rimes had no qualms about busting up her once happy family. LeAnn put the moves on Brandi’s then-husband, Eddie Cibrian right in front of her!  Flash forward nearly 4 years and we all know that LeAnn and Eddie have since married but that hasn’t helped the fairly washed up country star’s sanity.

LeAnn voluntarily checked herself in to a treatment center last year and I’m going to speculate that another trip will be coming sooner than later. If she thought the scrutiny and name calling (you know, home wrecker, evil, crazy b*tch…) was bad before, well Brandi has paved the way for it to now become a whole lot worse. LeAnn was spotted in public this week crying, quite literally, on her pal’s shoulder so that gives us all an idea of how stable she is now.

LeAnn’s first plan of attack was to drop $3 million on a home, according to L&S, in a gated community in the Hidden Hills area outside of L.A. She thinks that at this time the family (including Brandi’s two sons) needs to hunker down and be together. I totally get that and in most cases it’ll work wonders. The biggest problem here is that LeAnn is really trying to outrun herself, her own bad behavior and the damage that it has done to her.  It doesn’t matter if she and Eddie last until their golden years (and they won’t as long as available cocktail waitresses in short skirts exist), her life seemed to come to a screeching halt after being labeled a cheater.

Her music career faded and she has seemed to focus all of her energy on watching her husband like a hawk. She busted up two marriages to win over a guy that she herself clearly doesn’t trust! Will LeAnn ever bounce back in terms of the public eye? Or should she just stay in the Hidden Hills and live ;like a recluse? Tell us your thoughts in the comments below!