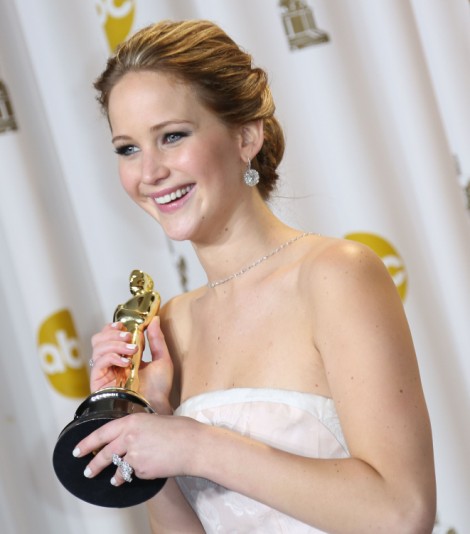 Are you surprised? Oscar winner Jennifer Lawrence was the woman of the hour. She was gorgeous. She was funny. She was self-deprecating and managed to be the one who actually fell walking up the stairs to accept her award. It was awesome and she played it off beautifully. Of course Leonardo DiCaprio wanted a piece of that. He’s a massive slut (in the nicest possible way) and was Jack Dawson/Romeo around the time she was 10 so she was ripe for that attention. And it’s a good match. Neither can do better – he generally and she superficially. It was written in the stars, right?

I might be getting too far ahead of myself. Let’s break it down.

Page Six reported that everyone wanted a piece of Jennifer last night and she was the envy of every girl at  Harvey Weinstein’s bash at West Hollywood’s Soho House. Apparently she stayed close to co-star and clearly infatuated Bradly Cooper but also was getting some one-on-one attention from Mr. DiCaprio himself. Apparently she, “rested her hand on Cooper’s shoulder while in intense conversation with DiCaprio.” Not bad, right? Screw the Oscar. You had America’s Sexiest Man on one side and Hollywood’s favorite on the other. Not bad at all. So was there flirting? Oh God, probably. This is Leo. True, she’s not his usual model, exotic type but I’d love to see him chase that. I love me some Nicholas Hoult but I’d kill to watch Jennifer be the one who tied Leo down. She’d be the Annette Bening to his Warren Beatty. I just called it. It’s on. It WILL HAPPEN.

All right so that’s out of the way, let’s talk fashion. What did you think of the Jennifer Lawrence Oscar gown choice? She wore Christian Dior Couture.  Naomi Watts was my best dressed of the night but Jennifer was a close second. She looked flawless. Her hair and make-up were perfect and the dress was gorgeous. I was a little underwhelmed at first because I thought the dress was all one color but did it flare out into two colors at the bottom? When she stumbled up the stairs I thought I noticed some pink in the bustling at the train? I hope so because I loved that effect. How about you – perfection or too boring? And are you down with the Leo gossip?