Liberty Ross Slams Kristen Stewart Betrayal – Time To Move On Or Does She Like The Fame? 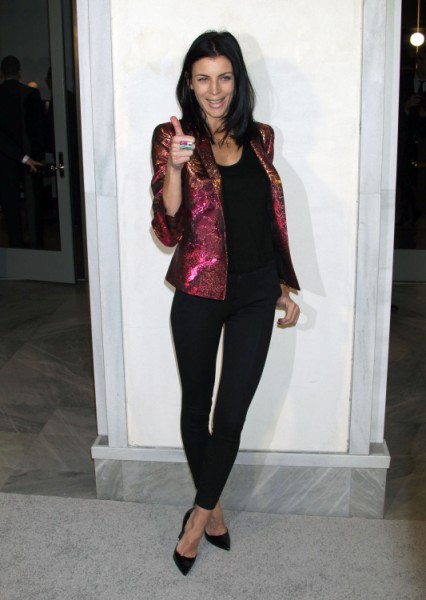 I’m kinda feeling a little over Liberty Ross. Did she get screwed? Of course. Did my heart hurt for her and her children? Naturally. But that was last summer. Time doesn’t have to heal all wounds but it doesn’t hurt either. And what a difference nine months make. Liberty’s at all the swanky parties in L.A. She’s getting movie roles and TV pilots. She’s dating millionaire music executive, Jimmy Iovine. Rupert Sanders who? I’m just saying… life didn’t turn out so bad for the model. So when she brings up Kristen Stewart and the scandal heard round the world again in an interview I have to shake my head. She’s coming dangerously close to Brandi Glanville territory.

Liberty recently told Net-a-Porter’s digital magazine The Edit that modeling saved her during her trying time last year. “I was not in a good way at that point in my life and felt incredibly vulnerable. Doing the show was daunting, but it was wonderful to get up there, show my strength and shine for someone who believes in me. I was very grateful.”

OK so she doesn’t mention Kristen’s name but we get the point, right? We know what she’s talking about. She’s not harsh but I would argue she’s stirring the pot just by bringing the subject up. She just as easily could have said, “It’s great to be back modeling. I’ve missed it and and it’s been so rewarding to my life”. Done. But she didn’t. This shows me that she knows her career resurgence has Kristen and Rupert to thank and she’s using it. Is that dumb? Hells no! But you get no more sympathy from me on the subject and no more trampire comments. Even I think it’s time to move on and I love this shit.

Oh, in other news, Kristen Stewart’s gay now. The National Enquirer reports Kristen’s hitting it with her girlfriend because Rob’s virtually abandoned her. Ugh, I can’t even enjoy the stupidity of this one.

Do you believe the Liberty Ross/Kristen Stewart saga should end? Does it sound like Liberty keeps using Kristen’s cheating as a way to make it in LA? Wasn’t she supposed to go back to London with her children? Funny what happens when you suddenly become in demand….