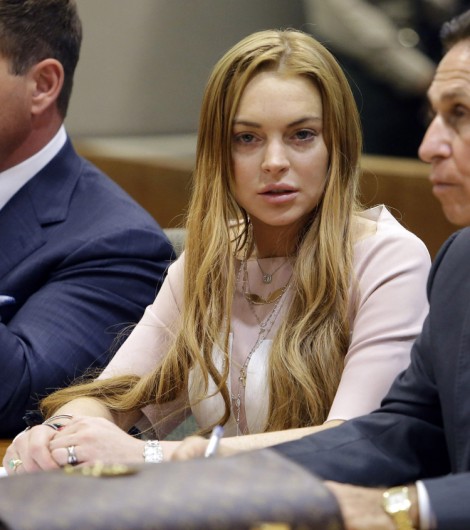 Good call judge. Obviously this girl can wait before she goes into rehab.

This picture below says it all, right? Biotch is a mess and biotch needs help. But who wants to help that? I wouldn’t want to touch that with a ten-foot pole. It just looks like I’d get fleas by being in the same room with that train wreck. Should I stop ripping on her? Is it just too easy and too sad now? No. No, it’s not.

While in Brazil promoting some sort of clothing line Lindsay Lohan had to hit up a nightclub and do what she does best. According to TMZ, Lindsay hid under the table of the nightclub because she was pouting over not wanting to take pictures with people in the club. She’s got to be drunk and/or high as shit at this point, right? Who does that? Did you take a look at that floor? That’s freaking disgusting. And who hides under a table? How old are we now? Just leave the club! Or better yet, find a hobby that doesn’t involve getting f-cked up all the time! Oddly enough there are other things in life to do with your time – some of them are even kind of fun. If you don’t want people bothering you or if you don’t want to see headlines like “Lindsay Lohan Flashes Her Crotch at Club” or “Lindsay Lohan Passes Out Under Table” then don’t hang out where people are drinking! Am I speaking Slovakian? Is this so hard to understand?

One of the best Dave Chappelle episodes is the one where Rick James comes over to Eddie Murphy’s house and rubs his dirty shoes all over his new white couch. After Eddie and Charlie Murphy beat the shit out of Rick, Eddie feels upset and says, “I think Rick needs some help.” But Charlie, ever the voice of reason, replies, “Man, we just gave him some help.” Does Lindsay need that kind of “help” at this point? Does somebody just need to slap the shit out of her? You know her mom’s not going to do it. Any takers? Somebody needs to do it since the judges all refuse to.