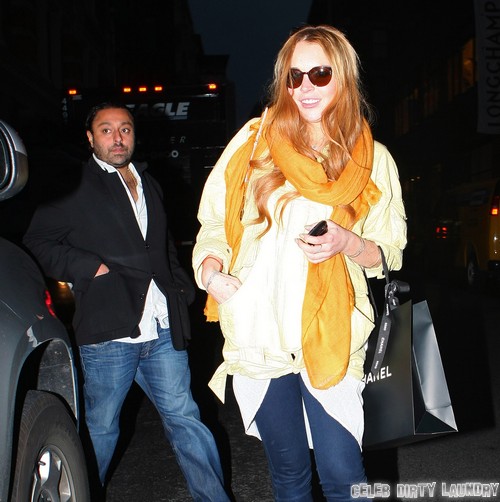 Lindsay Lohan is supposedly back on the sober track after coming out of rehab, and it seemed like she was doing well last week. She successfully guest hosted Chelsea Lately, she was interviewed by Oprah about how she was ‘back on track’, and she filmed a guest role in a TV series with minimum interruptions and apparent professionalism. She was also rumored to be spending time with a professional sober living coach, but is she really staying sober?

Based on all the above, I would have said yes. But that was before TMZ reported that Lindsay is spending time with her sometimes paramour and druggie, Vikram Chatwal. Chatwal was caught with heroin and other illegal drugs back in April, but he’s said to be clean right now. Right, two clean and sober ex-drug addicts just hanging out, going shopping. Not doing drugs.

Look, Lindsay has been telling everyone that she possibly can that she’s serious about staying sober this time, and that she’s cut out all the bad influences in her life, including old ‘friends’ who were negative influences. Chatwal falls right into the middle of the ‘bad influence’ category, and Lindsay hanging out with him is a sign that she’s not as committed to staying sober as she says she is.

Sure, we can look at this optimistically – maybe Lindsay and Vikram are trying to keep each other sober? I have a hard time believing it and this is Lindsay’s millionth chance to prove everyone wrong, but everyone should be given a chance to fix their life if they truly want to.

What do you guys think about Lindsay hanging out with Vikram? Do you think he’s a bad influence? They were only photographed going shopping, which is an innocent enough activity. Let us know your thoughts in the comments.