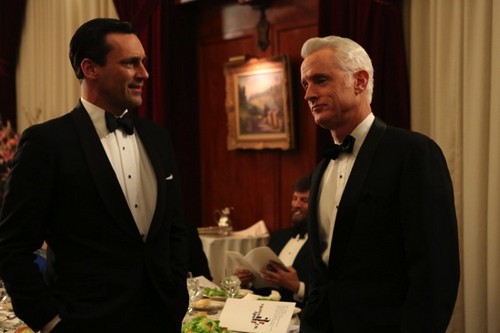 Tonight MAD MEN returns with a whole new episode called, “The Flood.” On tonight’s show Peggy plans for the future. Roger courts a potential client.  Did you watch last week’s premiere episodes, there were 2? We did and we recapped it here for you.

On last week’s show Megan was told she was getting a love scene in the soap opera she is in.  Megan was happy, but not sure Don would approve of it.   On the day she filmed the scene predicatably Don was not pleased and more or less called her  whore.  He said, “You kiss people for money.  You know what they call people who do that, right?”  Yikes!  Not nice and Megan was not happy!  The boys at SCD created a secret pitch of Heinz ketchup.  At the end of the day SCD did not get the account nor the agency where Peggy now works.

On tonight’s show Peggy sets her plans for the future, I’m wondering if she is going to stay with Ted or head back with the crew.  I am betting she heads back to the crew at Sterling Cooper Draper Pryce.  Don listened to her pitch with Heinz Ketchup and he was really impressed and I am certain he wants her back.  Meanwhile, Roger is courting a new potential client.

We will be live blogging Mad Men Season 6 Episode 5 at 10PM EST . . . so make sure to come back to this spot and watch the show with us.   Make sure to refresh often so you get the most current info!  While you wait for the episode you can catch a sneak peek of tonight’s episode BELOW!

IF YOU LOVE MAD MEN AND WANT A SNEAK PEEK AND SOME SPOILERS OF SEASON 6, EPISODE 6, CLICK HERE!