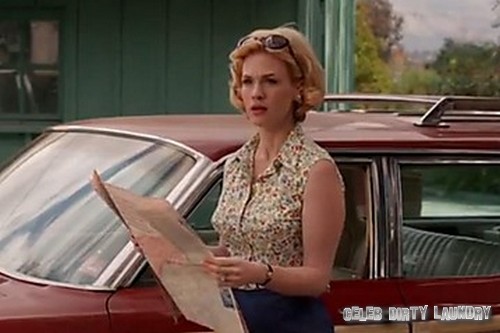 MAD MEN aired tonight with another great episode, I cannot wait until next week.  Next week’s episode is called, “Favor,” and we have managed to get our hands on some juicy spoilers and a sneak peek video of the episode.

On tonight’s episode Joan is set up with Andrew Hayes, the head of marketing at Avon. They enjoy dinner together and the meeting turns more into a business one as Hayes is looking for an agency. Joan shares her news with Peggy who then tells Ted and they want Pete to try to bring in the account. Joan wants to do this on her own and cuts Pete out of the picture. In the end, the firm is happy that Joan is bringing in the Avon account and Pete’s concerns are ignored. The firm finally comes up with a new name, Sterling, Cooper and Partners. Don and Roger go on a business trip with Harry to meet the Carnation people, Don smokes hashish and finds himself fallen into a pool. There is unrest in the city due to war; in the office it appears that Michael and Cutler are at opposite sides and when Michael’s attitude gets out of control, Cutler wants him fired but Ted won’t permit it.

Spoiler alert: If you’re one of those people who doesn’t like spoilers, stop reading now! We have some juicy spoilers for you about the season 6 episode 11 AMC’s “Mad Men.”

On next week’s show Megan is surprised to find Don at home and there is news to tell him but she is not sure if she should. Do you think that Megan could be pregnant? Pete is still extremely upset about Joan cutting him out of the whole Avon deal, he also did not like the new partner’s name and will have trouble accepting both. Pete gets a surprise visit from someone at his apartment probably one of the partners to tell him to cool off. Ted and Peggy are at dinner and he cuts her off with something important to say. Betty is concerned about Sally’s future and wants to talk to Don about it. Peggy finds yet more trouble at home and wants to get out of there as fast as she can.

Mad Men Season 6, Episode 11 “Favor” airs on AMC on May 26th, 2013. Check out the preview video from episode 11 HERE let us know in the comments below what you think of Mad Men season 6, so far?