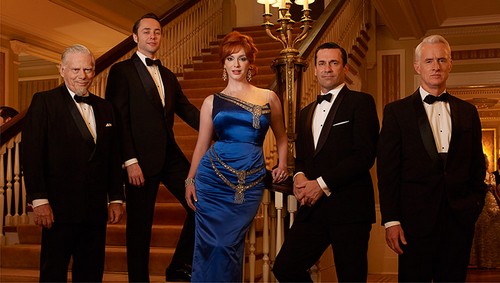 MAD MEN returned tonight with another fantastic episode, I cannot wait until next week.  Next week’s episode is called, “The Flood,” and we have managed to get our hands on some juicy spoilers and a sneak peek video of next week’s episode.

On tonight’s episode the partners work to keep the wraps on a secret campaign, Heinz  Ketchup.   Pete suggest that he and Don keep it to themselves.  However, the plan did not go as Don planned and Peggy had another victory.  Joan came home to find her friend Kate in town for a job interview.   Joan’s mother, insisted that Kate who has done Joan’s mother’s makeup stay for dinner.   Kate works for Mary Kay and she is here for an interview with Avon. Megan learned she was going to have a love scene on her show and she decides to tell Don.  He says, “I guess if I wasn’t your husband, I would be happy for you.”  Don ends up visiting her on the set, sees it and he is not pleased.  Don then meets Sylvia at the Rosens’ apartment.  Did you see tonight’s episode?  We did and we recapped it here for you.

AMC official synopsis: Peggy will make plans for the future while Roger courts a potential client.

On next week’s episode Peggy sets her plans for the future, I’m wondering if she is going to stay with Ted or head back with the crew.  I am betting she heads back to the crew at Sterling Cooper Draper Pryce.  Don listened to her pitch with Heinz Ketchup and he was really impressed and I am certain he wants her back.  She tells someone not to, “Do anything stupid.”  hmm wonder what that is about?

Meanwhile, Roger is courting a new potential client. Megan seems to have mended her relationship with Don and is looking pretty confident when she tells Don that they can’t avoid “her” forever, I wonder if that is Sylvia?  Could Don and Sylvia be done.  Hard to think that Don who is so selfish has given her up.  Pete also looks like he is pissed off next week.  Could the partners be considering making Peggy a partner?  What do you think?

Mad Men Season 6, Episode 5 “The Flood” airs on AMC on April 28th, 2013. Check out the preview video from episode 5 HERE let us know in the comments below what you think!