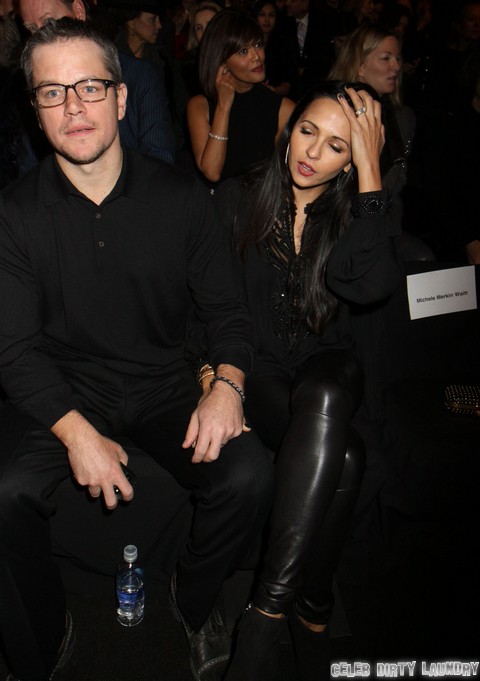 I wasn’t the only one upset when Argo won best picture at the Academy Awards—I admit I haven’t seen it, but how could anything beat Les Miserables, I just can’t make out! While Ben Affleck and Jennifer Garner were all smiles and celebration, Matt Damon’s wife Luciana Barroso was planning for a revenge move to refocus attention on her superiorly talented husband! As if that isn’t bizarre enough, the men are best buds! What’s a guy to do when his wife totally hates his best friends? Meekly put his tail between his legs, apparently! Matt responded in typical male fashion, by being a pushover and not telling Luciana to cool down and play nice!

“Luciana has always felt that Matt is more talented and way more deserving of recognition than Ben,” an insider told National Enquirer, print edition March 18, 2013. “It burned her up seeing Ben feted for months like he’s the king of Hollywood.” So what’s her plan for revenge? Well it’s a bit complex—basically she wants to steal Ben’s thunder with . . . the ultimate destination wedding? She and Matt tied the knot in 2005, but that won’t stop her from wearing white and being the center of attention at a lavish party!

If you’re as confused as I am about how a wedding will pull focus from a man who just won an Oscar, don’t expect any clarity. There is none. If this is true, Luciana is seriously delusional. Weddings are chump change compared to the successes marked by an Oscar! But she “wanted to stick it to Ben” and “announced they’re planning a destination wedding in April.” As if that isn’t weird enough, they’ve put salt on the wound by banning all children from attending! “It’s very unlikely Jen would ever leave their three kids behind,” so it was the perfect way to ban them from coming! So passive aggressive! Now the men have to put up with Luciana’s raging fury, while Jen seems pretty content to ignore it and hang out with her family! Do you think Matt and Luciana’s wedding is fueled by desire for revenge?