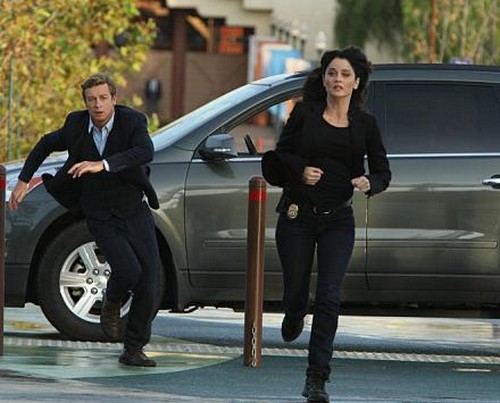 Tonight on CBS THE MENTALIST returns with a whole new episode called “Little Red Corvette.”  On tonight’s show Lisbon believes that the death of a geologist is the key to bringing down Tommy Volker.  Did you watch last week’s show?  We did and we recapped it here for you!

On last week’s show the CBI team visited a high-end California rehab center in order to investigate the death of a young model who was a patient there, while Lisbon ramped up her investigation into Tommy Volker.

On tonight’s show The CBI investigates the death of a geologist, which Lisbon is convinced is the key to bringing down Tommy Volker and therefore can lead to his downfall.

Tonight’s The Mentalist episode 12 is going to be exciting, and you won’t want to miss. So be sure to tune in for our live coverage of The Mentalist — tonight at 10PM EST! While you wait for our recap, hit the comments and let us know how excited you are about the return of The Mentalist?

Tonight’s recap:  Tonight’s show begins with a flashback to two months before when Horatio Jones was dragged into a warehouse by two mob guys and strangled. He was then thrown into some sort of storage thing. A little boy with a remote control car had been playing in the building and ran to hide when the men came in. He witnessed the murder and unfortunately made noise. The two hit men find him and one tells the other to take care of him because he’s a witness.

Now we flash ahead two months to when police are swarming the warehouse. The dead man is identified as Horatio who had been set to testify against Tommy Volker. Lisbon says it confirms what she had suspected, this guys disappearance is linked to Volker. They find the remote control car, but no kid yet.

Lisbon needs a DNA sample from Volker and believes that he is cocky enough to offer it up. They talk in circles and then he offers up the DNA. Meanwhile Jane is looking for the kid that he is sure was in that warehouse. He searches for missing kids and narrows it down to two possibilities. The boy named Marvin is the one they’re looking for and Jane is on it.

He goes to talk to Marvin’s mother and he shows her the car and she dissolves into tears. It was Marvin’s birthday gift. Lisbon gets her hands on Horatio’s deposition but there doesn’t seem to be anything new in it. They chat with Horatio’s girlfriend Annabelle and she downplays her relationship with him. The police let her go and she is immediately called to talk to Volker. She swears she’ll keep her mouth shut and she’s leaving the country. Volker says it’s a shame he’ll never see her again.

Lisbon goes to Judge Davis and fails to get a warrant to search Volker’s office. She turns around and goes back in all hyped up saying that her office has enough now and basically BS’s her way to a signed warrant. As his office is ripped apart he asks Lisbon to drop everything. Jane intervenes and tells Volker he can tell they’ve gotten too close for comfort. He’s trying to act in control but really he’s afraid.

Clyde is the hitman that was supposed to kill Marvin. Lisbon questions him and realizes he stashed the boy. They release him with the hope that he’ll lead them to Marvin. He gets a call from Volker telling him he’s a dead-man and two seconds later a bus stops and he is killed. Volker now realizes the boy is still alive.

He takes a hit man with him to Clyde’s sisters but the guy bolts after refusing to kill a kid. Volker goes inside and sees a flyer that indicates that the kid is on a field trip. He finds him and battles to get him out of the reptile building. Marvin breaks free and Lisbon catches up with Volker and shoots him. Marvin is then reunited with his mother. Tune in next week for another action packed episode!