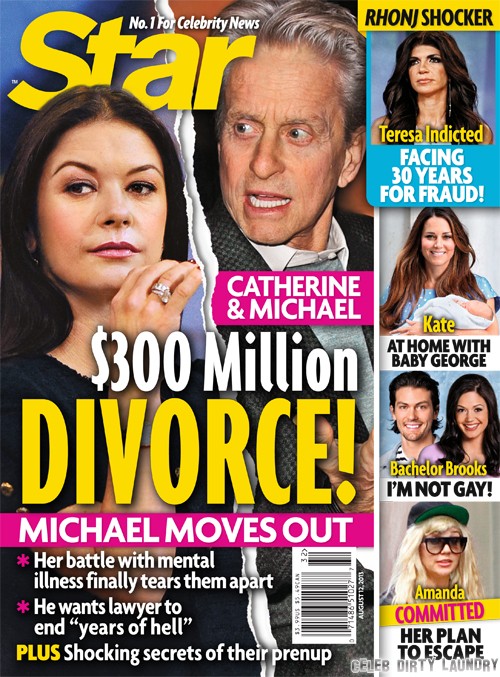 I have to admit I didn’t see this one coming! I’m talking about the rumored split between Michael Douglas and Catherine Zeta-Jones.  These two have battled a million problems over the last fifteen years but they seemed like they were always smack in the middle of the mess together. Apparently enough is enough, at least for Michael who, according to the August 12th print edition of STAR magazine has asked his attorney to dig him out once and for all!

After years of dealing with Catherine’s mental illness it seems that Michael is at the end of his rope. She has talked openly about being bipolar and how she expects to be hospitalized on and off for the rest of her life. Catherine has called it a “mental tune up” but my guess is that for Michael those days leading up to her admission have been pretty hellish. So bad that he would prefer a $300 million divorce battle to living under the same roof!

Also in the new issue you can catch the latest on the 39-count fraud indictment against Teresa and Joe Giudice. I’m betting this is the one story that Tre hasn’t sold to the press for fast cash! Although maybe she should because I’m guessing many of her assets must be frozen, right?

Amanda Bynes is still being held on a 5150 in LA and according to STAR a battle is being waged. She is struggling for release while her parents are fighting to keep her in the hospital to get the obvious help that she needs. Do you think they’ll release her too soon? Better yet do you think she actually wants help? Tell us your thoughts in the comments below!