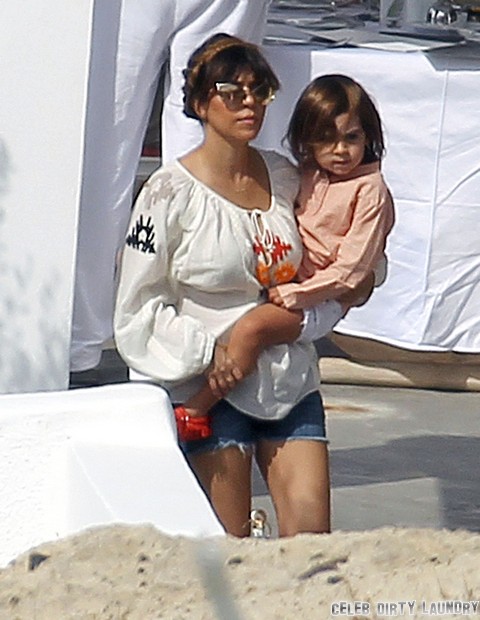 Michael Girgenti just refuses to quit. Kourtney Kardashian‘s alleged former lover is continuing on his quest to claim Mason Disick‘s paternity, and he insists that he is Mason’s real father, not Scott Disick.

His latest step has been to upload a baby photo of himself in a bid to showcase the purported resemblances between himself and Mason. He claims that Mason is a ‘spitting image’ of him as a young child, and it’s further ‘proof’ that Mason is his child.

Seriously, what kind of delusion is this guy under? I’m not the biggest fans of the Kardashians, but Michael just refuses to quit, doesn’t he? I’m really sorry to be so blunt, but honestly, at that age – most kids look the same. Or if not the same, they look similar. Yes, both the baby pictures show a cute toddler with wide brown eyes and light brown hair. That could describe millions of babies and toddlers across the country. It is in no way ‘proof’ that Mason is Michael’s son.

Only someone who’s delusional or an unfailing famewhore would use that tactic. I don’t think Michael’s delusional – the way he’s unveiled his paternity claim through Star Magazine says otherwise – but he does seem to epitomize famewhore. I can’t believe that the freaking Kardashians are the victims of famewhoring, but I guess they’ve become a household name now, for better or for worse.

The Kardashians continue to refuse Michael’s request for a DNA test, which is not a smart move. Ignore the famewhore, and his claims only grow louder. Give him what he wants, and he’ll go away. Scott and Kourtney end up looking more guilty when they continuously ignore requests for a DNA test, even though I can see their point of view. Imagine you and your husband had a child and some random person claimed to have an affair with your wife and stated your son was his son – you’d turn this dude into the police, right? Well, famous people don’t have that luxury, unfortunately – or if they, the police don’t pay them any attention. Yes, boo hoo, the one downside to celebrity. So they just have to put up with it, or deal with it.

Do you guys think Kourtney and Scott will give in and give Michael a DNA test? Or will they continue to refuse to pay him any attention? Let us know your thoughts in the comments.