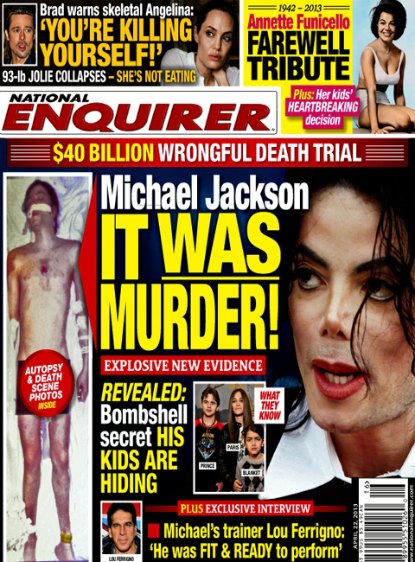 Michael Jackson’s death controversy is featured on the cover of the latest issue of the National Enquirer. The tabloid is claiming that there is bombshell new evidence that the King of Pop was murdered! Can you imagine that?

There has been some controversy surrounding his death ever since he passed away. The circumstances have always been unclear at best and no one really knows what exactly happened in its entirety. The magazine claims that there has been some explosive new evidence introduced and they pin his death on murder. It could have happened that way, no?

We would be hard-pressed to feel bad for Conrad Murray even if he was just the fall guy. The tabloid makes the claim that Michael’s children, Paris, Prince and Blanket are all hiding some new secret about the whole situation.

Lou Ferrigno, Michael’s trainer, also claims that Michael was fit and ready to perform at the time of his death. To sell more magazines, the tabloid has also placed a photo of Michael already dead on the cover. So sickening, isn’t it? Can’t they just let it go already? It’s been nearly four years since his passing.

What do you think? Let us know your thoughts in the comments!