Mila Kunis Would Rather Be Naked Than Talk About Ashton Kutcher, Fifty Shades Of Grey Hint? 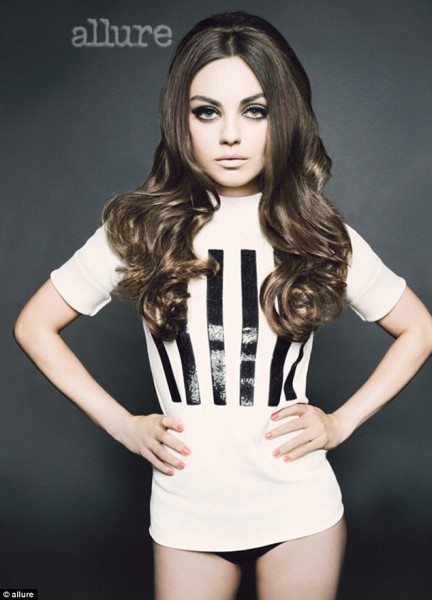 I always like reading Mila Kunis interviews. She usually answers questions in a straightforward, no bullshitting sort of way and doesn’t shy away from taboo subjects nor does she take herself or her job too seriously. James Franco could take note but we all know he won’t so let’s move on. Mila’s The Great and Powerful Oz is hitting theaters soon so she’s on the cover of Allure magazine to promote and getting naked with Justin Timberlake just had to come up. Ugh, sorry I just threw up in my mouth a little bit, but these are her priorities. She’ll talk about her nudity in films… and Justin Timberlake… but no Ashton Kutcher. Mila Kunis’ refusal makes me grateful from a personal level but, from a gossip perspective, I’m nervous. Her silence only once again shows how serious these two are. I’m still calling it. Wedding in April!

“I showed side boob. I don’t need to show ass. You get one or the other. You don’t get both,” she said regarding her movie, Friends with Benefits. But Mila got much more guarded when Ashton’s name was brought up. “I didn’t think this was going to be about my friends. Happily about myself! Not about who my friends are, who I’m dating, or who I may have ever dated. That’s not talking about myself!”

I’m not sure if that makes sense but I’ll go with her on that one.

This new info can’t be welcoming to all you Mila Kunis/Fifty Shades of Grey nuts out there. It was rumored that she was pitching herself for the role earlier this year when she allegedly told The Sun that doing the movie would be “fun” but I don’t know how she can pull off Anastasia Steele by only showing a little ass or a little boob. Whoever takes on that mess is going to have to lose a lot more dignity than that. I’m comforted by this. It was no surprise I wanted Mila as far away from that as possible!

Oh, but yet again, I’m not comforted about the Ashton bitch slap. He’s definitely around to stay for a little longer. Interesting enough, Mila also told the interviewer that she was single for four years after she broke up with Macaulay Culkin. That seems off to me. I thought she dumped Culkin and picked up Demi Moore’s sloppy seconds soon after. I supposed it’s nice to know she’s not a serial dater but she still ended up with Ashton Kutcher so I refuse to be placated!

Do you appreciate the candor and/or lack of candor in the Mila Kunis/Allure interview? Does her refusing to talk about Ashton solidify their serious (and possibly engaged) status for you?