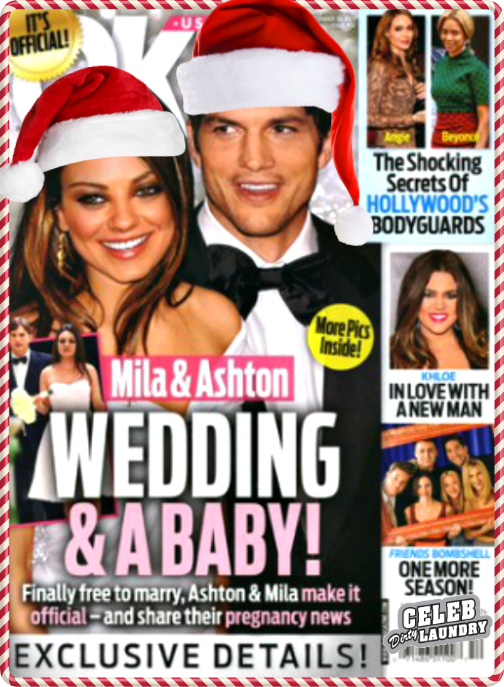 According to the latest cover issue of OK! Magazine, Mila Kunis and Ashton Kutcher are getting ready for a wedding and baby. Just to keep track, this might be the fifth time they’re ‘getting ready’ for a wedding and a baby, although I don’t doubt that there’s some truth to all the stories.

It’s obvious that Mila and Ashton are getting serious, and they probably did get unofficially engaged before Ashton’s divorce to Demi Moore was finalized. But now that it is finalized, they’re free to finally go ahead and announce it – but they haven’t. That means that they’re waiting for the right time to tell family and friends or they haven’t done it yet. If Mila and Ashton were actually engaged, I guarantee you that we would have heard about it from People or US Weekly by now. Mila may be intensely private about her love life, but Ashton certainly isn’t.

The source tells OK!, “Mila and Ashton talked about getting married in the UK, where they spent many happy weeks together earlier in the year while Mila was filming Jupiter Ascending. [They are also thinking of] getting married barefoot on the beach in California or in a flower garden.”

Well, they’re keeping their options open and the paparazzi probably hounded them much less in the UK than the US. But that’s not because the paparazzi there are better [they’re actually worse], but because Mila and Ashton hold less interest abroad than they do in the US. They’re not exactly household names in the same vein as Brad Pitt and Tom Cruise, but if they were to have their wedding there, I can guarantee that it would be swarmed by paparazzi nonetheless. But when it comes to their rumored baby, Mila would have been showing by now if the rumors were true. So while Mila and Ashton will no doubt have their wedding and baby in the future [provided they don’t break up], it’s not happening just yet.