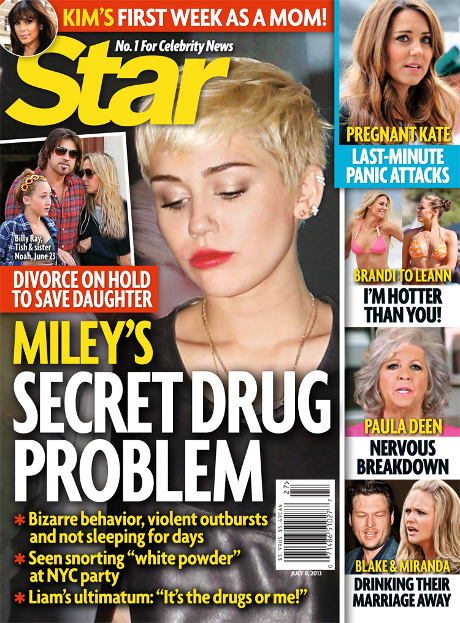 Is Miley Cyrus dealing with a secret, debilitating drug problem? The recent cover for Star Magazine makes the heavy claim that Miley Cyrus is, indeed, suffering from a drug problem that’s influencing her life in negative ways. The tabloid also claims that Miley’s parents are putting their divorce on hold to “save their daughter’s life.”

The cover of the magazine goes on to report that Miley hasn’t been sleeping well, is experiencing bizarre behavior, has suffered violent outbursts, and was seen snorting a “white powder” at a NYC party. The bitter icing on the cake? Liam has given her an ultimatum: “It’s me or the drugs!”

I’m not sure how much of this is true — if any of it is true. Now, we all know Miley does drugs (she leads a very “open” life via social media), but is this just another instance of a magazine spinning things out of control? Who knows? I saw her earlier today on Live! with Kelly and Michael and she seemed to be relatively put together. She came out wearing sunglasses and had her usual upbeat personality going full speed. She did mention her erratic bouts with insomnia — which she attributed to a hectic schedule. Currently, she’s working nearly every major talk show in the industry.

Other stories in the magazine include articles on Blake Shelton and Miranda Lambert, who are now apparently hardcore alcoholics, according to the mag; Paula Deen’s racism scandal; the latest catfight involving LeAnn Rimes and Brandi Glanville; and pregnant Kate Middleton’s last minute panic attacks.

Check out the magazine soon. What do you think about Miley Cyrus? Do you think she’s headed down a path of self-destruction? Or do you think this mag is just trying to bank on her success, which seems to have been renewed after the release of her new music video — which broke all kinds of records on Vevo.