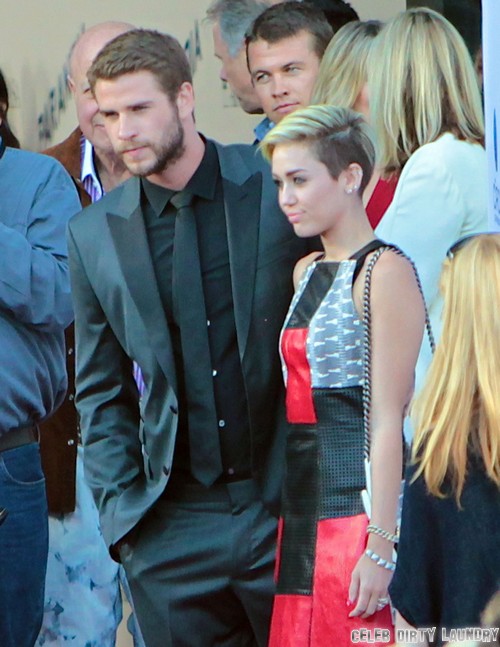 Has Miley Cyrus finally, finally given up on Liam Hemsworth? It’s been many, many months since their relationship first started to crack, and since then, it’s seemed like she’s refused to let go while he’s been desperate to get away from her. But according to a new report from In Touch Weekly, Miley was spotted making out with another man [who was definitely not Liam] during a night out before her VMA performance last Sunday. Maybe this is why Liam was a no-show?

The last time the couple were seen together in public was at the Paranoia premiere, and neither of them looked very… happy. No, scratch that. Miley looked normal, and Liam looked absolutely miserable. If that wasn’t a sign that their relationship was over, then I don’t know what is.

A source claims to In Touch that Miley and her friends were partying at 1Oak in New York City when Miley supposedly got ‘pretty out of control‘. Meanwhile, Liam’s been in New York City and was spotted attending the premiere of Rush, his brother’s latest film.

So is this it – is this the unofficial announcement of their breakup? Although Liam’s team has steadily been leaking rumors about his impending breakup with Miley over the last few months, we’ve never heard anything from Miley’s side. The fact that her behavior has changed so drastically in the last month coupled with this latest rumor makes me thing that they are done for good, and this is Miley’s way of getting over the heartbreak. It wouldn’t the first time this happened, and it definitely won’t be the last.

What do you guys think? Do you think, against all odds, that Miley and Liam are still together? Or are they finally dunzo for good? Let us know your thoughts in the comments.