Miley Cyrus Believes She’s the Future of Sexy – It’s Everyone Else Over 40, Especially Matt Lauer, Who Isn’t (VIDEO) 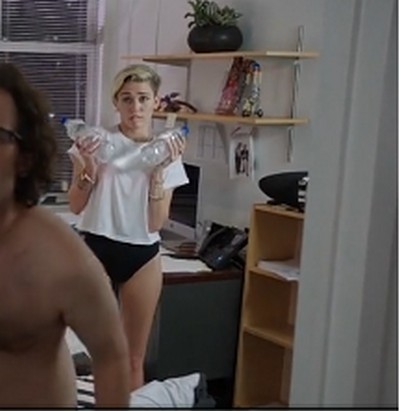 Miley Cyrus really needs to stop opening her mouth. Before we all were wondering what could go in but now fearful of what could come out. It’s gotten that bad with her off the wall comments. This time she went too far. It seems the girl who refuses to wear an appropriate bra (and highly risking premature  and aging sagging) wants to set term limits on who can and can’t be sexy. Like everyone over 40 can suddenly become A-Sexual while she at 20 is sexy. I mean is she serious?

Not only do plenty of women rock an actual sexuality pass 40 but they do it with class. Miley on the hand its all shock and awe. Showing the crowds everything does not equal sexy. It’s just means they overpaid for a peep show. Displaying your nether lips is the same thing a dog does in heat. No one expects a young woman to degrade herself that way unless it’s at a strip club. Not that there’s anything wrong with strip clubs, I’ve even heard the dancers sometimes do musical acts. So if Miley wants to continue with the piss poor acts on stage then hey I can recommend a stage that will take her gladly.

Why do we care about her? Because even though she claim she’s grown she is still acting like a child. She wants to change her image and she goes polar opposite. Fine. She wants to test boundaries. Ok. She wants to insult you today and have forgive her tomorrow. Sorry but you’re cuteness factor done worn off.

She is a kid and that makes me feel like a pedophile every time I see on her stage. And I’m not saying this because I grew up with Hanna Montana. I’m saying this because she doesn’t know who she is and mostly will change her persona by 2014.  As for now she is lost and confused with no thought but right now. We’ve all been there. We don’t have to cut her slack but we can change the channel. Let her lose some viewership and attention she’s been bent on seeking. They are plenty of other famewhores we can watch in the meantime.