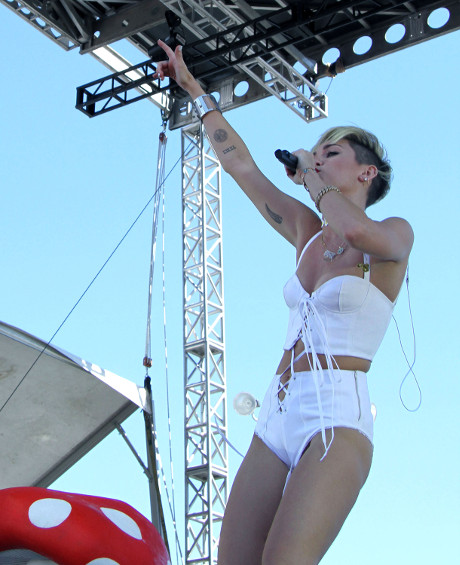 Oops, she did it again. And no I’m not talking about Britney Spears. Miley Cyrus gave another interesting performance at the iHeart Music Festival in Las Vegas on Saturday. Although the newest Vegas resident, Britney, introduced Miley, it’s Miley’s fashion statement/predicament that has people talking.

Miley entered the stage with black pasties covering her nipples and black panties to match. She did give the ensemble a touch of class by wearing a sheer net dress and white fur to cover her arms. This was the singer’s second musical set at the festival. Before that, she performed in a white crop top that allowed the former Disney princess to be the latest victim of a nip-slip wardrobe malfunction. This was paired with tight shorts that also left nothing to the imagination. Check out photos of the performance below.

She also traded in her infamous foam finger for a banana shaped microphone. However, she did perform well. She sang “We Can’t Stop” and the current Billboard number one hit, “Wrecking Ball.” Its even been reported that tears could be seen during “Wrecking Ball” — with the performance occurring just days after the split with fiance, Liam Hemsworth, was publically announced. He has since moved on.

Stars like Britney, Miley’s dad (Billy Ray Cyrus), and even Cher have defended Miley in the past few weeks. Several iHeart Music performers have also lended their support. But what are your thoughts on Miley’s on-stage fashion choices?