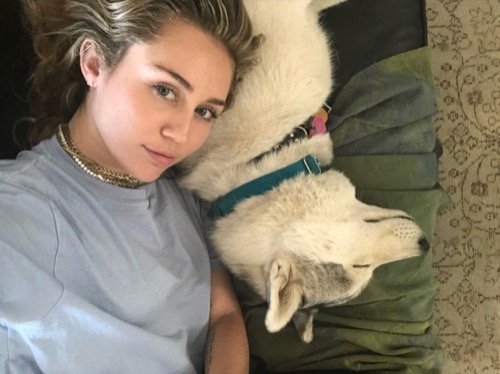 Miley Cyrus has released photo chilling with her dog Floyd! Although there have been rumors that Miley has broken up with her longtime boyfriend, Liam Hemsworth the couple have put those rumors to rest.

TMZ has reported that the couple intends to stay engaged forever and never get married.  Although the breakup rumors have been circulating for a while the two were photographed together having lunch together.

In other news, Miley says she now has 20 tattoos and 9 are located on her hand.  None of the tattoos are large they are very small. Her very first tattoo was of the words “Just Breathe” which is located on the left side of her rib cage.

Which is your favorite tattoo of Miley’s?  Do you have the two as a couple?