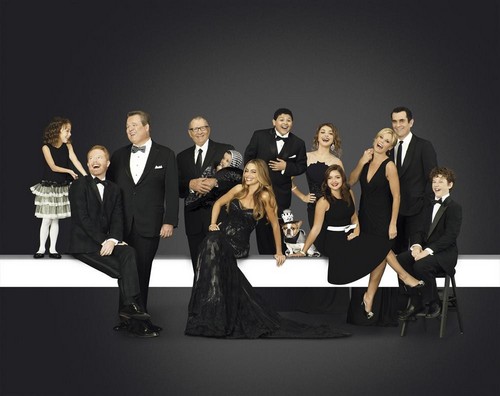 Tonight is ABC’s hit show Modern Family  continues with another new episode called ‘’Larry’s Wife.”    On tonight’s show only with Cam will a little white lie turn into a fully fleshed out pet funeral.  Did you watch last week’s two-hour season premiere?  We did and we recapped it right here for you.

On last week’s season premiere the family was in the throes of summer activities: Phil and Claire were trying to orchestrate a kid-free week by coordinating Luke’s camp with Haley’s beach trip and Alex’s volunteering excursion; Jay and Gloria were getting Manny ready for his first solo trip back to Colombia; and Mitch and Cam made it a summer to remember.  Luke and Manny had their first day at high school, which proved to be harder for Phil and Gloria than for the boys. Elsewhere, Claire made her big return to the workforce at Jay’s closet company and was a little rusty on her first day, and Cam started a new substituting gig at the high school, leaving Mitch to try to juggle Lily’s first day in 1st grade and a very important meeting at work.

On tonight’s show Phil seems to have found his wheelhouse in real estate – recently divorced women – but it’s taking up a lot of his time. Meanwhile, Luke invites his buddies over for a high-stakes poker game in the basement; Gloria think baby Joe might be cursed; and Cam holds an elaborate pet funeral for Larry the cat’s made-up wife — all for Lily’s sake.

Phil has been on a hot streak with his business lately. He found his niche in the severely limited real estate market; newly single moms. They’re needy and desperate to win male approval. He’s been selling to them left and right and all he had to do was drop a few compliment here and there.

Right now the only woman he should focus on is Claire. She gave him a massive to do list while she’s doing something for work. But knowing Phil some and not all of it will get done. Just to push him into action she had to leave a voicemail message. Will he pay attention to the voicemail is up for debate.

Jay and Gloria’s son was kicked out Baby Gymboree. He likes to play rough and after too many times caught making the other babies cry he’s been giving his walking papers. Gloria is so upset. Not at her son but at the family curse that must be making her baby so violent. Jay tries to reason with her on the whole curse thing but she won’t listen. Growing up she learned her whole family suffers from a curse.

If not the family’s curse then it could be the family’s dark side. Manny was able to escape but the baby doesn’t seem to. Jay asks why they can’t allow children to be themselves. He says this as he tries to change Manny’s personality by trying to get him to see Death Wish over the Sound of Music.

Mitch and Cam have to deal with not only their wedding plans but they also have to get a new cat for Lily. Her old one ran off to never be seen again. Cam is fine with that, it’s Mitchell that feels they need have a whole big talk to with their daughter. However she could be the excuse he’s hiding behind.

Mitchell has a problem with letting go of control. Before it was one of things that made his relationship with Cam so special yet now that Cam has pretty much picked out everything for their wedding it has turned Mitchell into a freak. A clean freak. There isn’t a spot of dust anywhere in his office.

Claire returns home and guess. That’s right there are still chores to be done and her kids are all acting weirdly. Luke allowed his friend to kiss Alex as a repayment for a gambling debt. Hayley wants in on wining some of the Bar Mitzvah money as well so she decides to join in on the poker game. What was Phil doing throughout all of this? He was dealing with his clients. Claire warns him that he can’t juggle all those women. He’s not good at it and it’s time to stop playing the hero.

Gloria hasn’t forgotten about her son’s bad side. After Jay and Manny left she called in reinforcements. She got a priest to come over and exorcise the baby. The priest doesn’t want. Yes, Jo nearly choked him when he got in and the baby did arrange his blocks into 666 but that can mean anything. Frankly the baby could get his temper from Jay.

The guys’ day out at the movie theater didn’t start off so well. Jay ran into rude kids whom he then did his best to correct. Like teach them manners and assist with pulling up their pants. Manny got embarrassed. He knew those kids from school and he doesn’t like Jay’s cranky temper either.

The cat, Larry, did come back. He did that in the middle of Cam explaining his disappearance. Cam said the cat got married and moved away. He only came back because his wife died. Lilly gets so upset that Cam volunteers to throw a funeral for the cat’s fake wife. Too bad he hired Dylan to bury the cat. Dylan hit a water pipe and ruined the funeral. Not even the hired bagpiper could resurrect that ceremony.

Mitchell was so busy cleaning that he accidentally got caught in an air vent. He was cleaning it when his ladder fell from underneath him. An intern helped him out. In more ways than one. Mitchell needs to be a part of the wedding and Cam learned after today’s fiasco that he needs Mitchell’s help.

Phil really couldn’t juggle the women. Claire caught him grocery shopping for one of his clients until two other clients spotted him and realized they weren’t that special. At that point Claire decides to take pity on him and helps him escape unscathed. All he has to do later is admit she was right.

Jay did keep his cool at the theater but Manny lost his. Someone had dissed Mary Poppins and it was on. He got kicked out of theater and ended up watching Jay’s movie. They returned home talking about blood and guts just as the priest was leaving. The Priest decided it would be best if he gave Gloria his card. Unfortunately Jo had gotten his hand on the Father’s wallet.

Alex had helped her siblings win at their poker game and then she got too cocky and ended up losing. As a result she now has to go one a date with Luke’s friend. EWWWWWWWWWW!!!