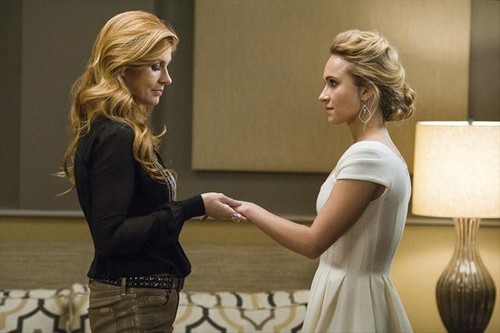 Nashville returns to ABC tonight after the Christmas break with its Winter premiere entitled, “Be Careful of Stones That You Throw.”  Tonight we expect Rayna and Juliette to struggle with their past and how they relate while on tour.  Wyclef Jean of Fugees fame guest stars – heck it isn’t President of Haiti but it’s a living.

Nashville is about fictional music legend and entertainment icon Rayna Jaymes and Juliette Barnes. Rayna has been one of the industry’s top female vocalists for two decades but her star is on the wane. Despite a great work ethic and tons of talent Rayna discovers that she is behind the eight ball because she is seen as old school. The new generation of county artists is pushing the old guard out.  Regardless of intrinsic talent or lack thereof.  Youth is where its at in the entertainment business and that’s a fact. To add insult to injury Rayna is being steamrolled by her longtime label, which she was critical in building.

Juliette Barnes, her arch rival, is sexy, aggressive, and she’s got trouble written all over her. She’s the hottest act in the business and she’s not about to let anyone stand in the way of her success, especially not Rayna Jaymes. On her way to the top her girl-next-door image takes a beating as scandal and skeletons come trooping out of her closet. Juliette is calculating, has an insatiable appetite for fame, and will do whatever it takes to leave her hard knocks past behind.

On tonight’s episode Rayna and Juliette are locked for their tour. When Rayna suggests taking her girls with her, she finds that Lamar’s not above holding her hostage with some long forgotten family secrets. To everyone’s surprise Juliette and Sean have eloped, though not everyone is celebrating. Deacon reconnects with a former flame, and Avery follows the advice of a new music producer that puts more space between him, the band and Scarlett.

Tonight’s episode is going to be wonderful and you must not miss it! Tune in for our live recap of ABC’s Nashville tonight at 10 PM EST!

Rayna is in the studio and Juliet still hasn’t arrived. Glenn says it’s not like her to be a no show. Juliet is in the back of a limo with her new husband. He wants to tell their parents but she wants to have more sex. Juliet gets a call reminding her that she’s needed in the studio.

Scarlett tries to get Gunnar’s opinion on her song. He wants to leave. She wants to know when he’s punishing her. Scarlet decides to leave.

Dominic tells Avery that he doesn’t owe anyone else but him.

Juliette finally arrives and tells her management she got married. They want to know if she got a pre-nup. Rayna offers her half hearted congrats. Juliet doesn’t know why she wants to know since Rayna hates her. Rayna says it’s just business and they need each other.

Sean’s parent’s are upset that he and Juliet got married. His mother wants the marriage done right with an actual ceremony—just family and close friends. Juliet says she has to go on tour on Sunday. She says they’ll make it Saturday.

Rayna tells Teddy that she’s taking the girls on tour with her. He says she’s not doing that without a fight.

Juliette and Sean try to figure out their upcoming schedules between her tour and his football career. He wishes she had talked about it with him. She tries to seduce him but he’s serious. She says they can hook up when they can.

Teddy’s opponent in the mayoral race only got a slight bump because of the photos. Teddy is no longer sure he should try and stop Rayna from leaving.

Avery tells his band members that he has to go solo. JT wants to beat him and calls Avery a famewhore. He wishes the “douche” good luck in Atlanta.

Juliette tells her mother-in-law that her manager will walk her down the aisle. Sean’s mother needles her about her mom being in rehab and expects a lot from her new daughter in law.

Rayna is threatened by Peggy and Lamar into not taking the kids to leave. She orders them out the house.

Avery and Scarlett share a goodbye. He says he looks at her and he’s still ruined. He kisses her which leads to sex. Afterwards, he asks if she wants to go back in the studio with him. She can’t believe he fired JT and forgot how selfish he could be since he hurts people.

Deacon is surprised that Rayna is going out on tour with Juliet.

Sean shows up during one of Juliet’s rehearsals. She introduces him to everyone. Juliette is surprised when Sean says he called her mom’s rehab and wants to make an introduction.

Juliette visits her mom in rehab. She wonders if Juliette has read her letters. Juliette tells her mom that she’s getting married. Her mom says it’s not right because she has said vows to someone she doesn’t know and it won’t fill the void. Juliette accuses her mom of not wanting to see her happy. She wonders if her mom really is happy.

JT tells Scarlett that they should start a club called Avery exes. He suggests they take the stage later together which they do. He says she was great and asks her to be a permanent part of the group. He wants her to at least think about it. Avery is upset when he receives video of Scarlett performing with JT.

Rayna shows up at Teddy’s office, blasting her father and Teddy. Teddy says she has known all along that Maddie is not his biological child and threatens his father-in-law into keeping his mouth shut.

Juliette wants her and Sean to go away to New York. He says he just can’t take off.

Deacon sleeps with the reporter.

Rayna thanks Teddy for standing up to her father and she is grateful. She thinks they should be honest with each other about what’s been going on between them for the last few years. She doesn’t know if either them are happy together but the girls love their parents and it needs to stay that way. She won’t take the girls on tour. Teddy thinks the tour is the perfect cover both privately and publicly.

Glenn says that Juliette looks great and that the photographers are five deep around the church. Sean has sent Juliette a family heirloom to wear on their wedding day.

Gunnar tells Scarlett he heard she played with JT. Scarlett says she finished the lyrics to the song they were working on.

Rayna leaves for her tour.

Juliet takes off the necklace that Sean gave her. She decides to ditch the wedding and instead boards a private jet.