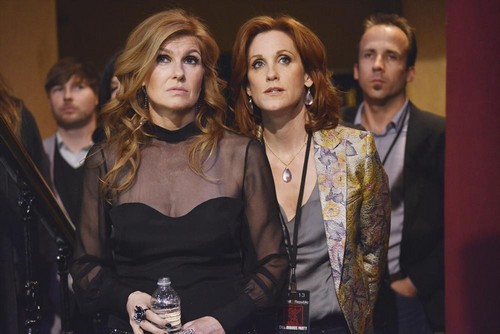 NASHVILLE returns to ABC tonight with a new episode called, “Take These Chains from My Heart.” On tonight’s show Rayna and Juliette are nominated for CMA Awards.  Did you watch last week’s episode? We did and we recapped it here for you!

On last week’s show Liam invited Rayna to run away with him to finish her album, and Deacon was surprised by his own reaction, as well as Stacy’s accusations; Jolene warned Juliette about Dante’s loyalty, which only drove the two women further apart; Teddy faced off with Peggy about the leaks, and in the wake of her father’s illness, Tandy proposed a new alliance to Coleman. Meanwhile Gunnar tried out some new music, and Avery and Scarlett reconnect.

On tonight’s show Rayna and Juliette are both nominated for CMA Awards and Edgehill Records hosts a party in their honor. Meanwhile Teddy worries about his relationship with Maddie, Juliette copes with new challenges, Scarlett is concerned about Gunnar, and tension grows between him and Will. 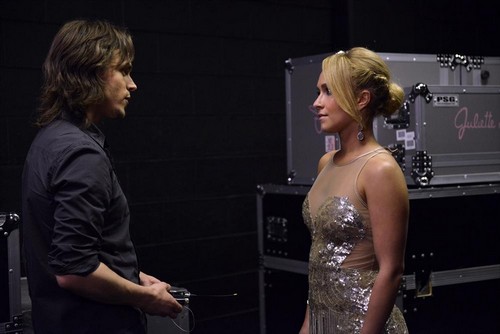 last week we saw Deacon hook up with Rayna and tonite it is still causing some aftershocks as Rayna insists on putting motherhood first and foremost/ Deacon has Stacey to go home to but as he puts it, she’s no Rayna. Juliette is still reeling from Dante’s betrayal and the sting is made even worse when she finds that he racked up a $17,000 charge for a ring intended for someone else. She’s spiraling out of control and downs several drinks at the party thrown to celebrate her CMA nomination. The problem is right before taking the stage Juliette fires Deacon and then scrambles to find a guitarist.

Scarlett is really worried about Gunnar and he is having real issues with Will. He feels like Scarlett is allowing Will in to kind of take the place of Jason and he reminds her pretty strongly that no one can ever do that.

Juliette allowed Avery to step up and play the guitar during her set and she was pleasantly surprised. She is very trashed and makes a failed attempt to take Avery home for the night.  Scarlett takes a moment at the party to introduce will to Rayna and Rayna suggests that he submit a tape to her.

Rayna gets in the car to be driven home and Deacon joins her. He tells her that whatever she has been hiding is irrelevant because they’ve already been through so much. He tells her to tell him everything or nothing- it doesn’t matter/ Just don’t deny that she loves him because Deacon knows that’s what she really feels. Rayna tearfully admits it. They end up in bed with Rayna singing while Deacon plays guitar.

Scarlett finally gets home from the party and is thrilled to see Will waiting for her. She sees his notebook and realizes that he stole Jason’s song.

Ironically enough Juliette ends up at home drunk with Jolene taking care of her. As she puts it, the apple doesn’t fall far from the tree. Tonight’s episode ends with Juliette taking a call from Dante. Tune in next time for more Nashville.