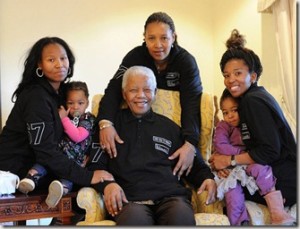 For two of Nelson Mandela‘s daughters, the news of their father’s death reached them during a particularly unfortunate time. Zindzi Mandela and Zenani Mandela were both at the premiere of Mandela: Long Walk To Freedom, the biopic of Mandela’s life [starring Idris Elba and Naomie Harris] when they were told of the news of their father’s passing. With their blessing, the movie’s screening continued, but it had to be difficult for them to learn of his death during such an occasion.

What’s even more heartbreaking is that during the red carpet, before Zindzi and Zenani learned of their father’s passing, they were giving interviews about what the movie meant to their father. Zindzi even told reporters, “It’s something that makes me feel really proud, what my family went through and the role my father played has been recognised. It is a reward [for him]. When we document our history in this manner we do it not just for ourselves but also for the future generations, young people that my father is really passionate about.”

The producer of the film, Anant Singh, was also on hand at the premiere, and he sounded choked up when he told audiences that Mandela had passed. Eyewitnesses who were at the premiere state that there were a few gasps and cries ringing out after the announcement, but neither Zindzi nor Zenani were there. Having already seen the film, they were back at their hotel, having intended to go directly to the after party. Alas, that definitely did not end up happening, and what would have been an event of joyous celebration turned into a period of grief and sadness – and not just for Zindzi and Zenani, but Mandela’s family, friends, and everyone he affected across the world.