NFL Football Braces for Gay Players to Come Out of the Closet – Kordell Stewart? 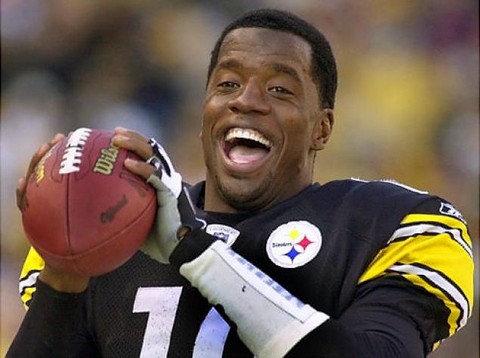 The NFL has long been thought of as a big boys club, filled with manly guys with a hot chick on their arm. Not only has it never been cool to live an openly gay life in this high stakes, money making sport, but it is absolutely frowned on.  Very few players have opted to step out of the proverbial closet after retiring from the NFL and some that have been dogged by rumors have actually held press conferences proclaiming their straightness.

According to the April 15th print edition of GLOBE, scandal is right around the corner for the NFL. At least one player that played in the last Super Bowl is fairly openly gay and another constantly wants to be fixed up with A-list actors. Then there’s Kordell Stewart, an ex-Pittsburgh Steeler who recently dropped his “black trophy wife” like a bad habit. He has long been dogged by rumors of being gay to the point that the bad press and drama helped force him into retirement much sooner than he would have liked.

Kordell finally married Porsha Stewart back in 2011 and spent the better part of two years controlling her every move. She called herself a trophy wife but she was more like Cinderelli, cleaning her house and making sure dinner was on the table before he strolled through the door. She was actually the perfect beard for Kordell to hide behind, at least until she started pushing really hard for babies and then he pulled the plug. Those in the NFL were more surprised by his marriage than by Kordell’s impending divorce. There are also some rumblings that Kordell could decide to stop living a lie once and for all and finally come clean.

Do you think more players will come out before retiring in the NFL? Tell us your thoughts in the comments below!