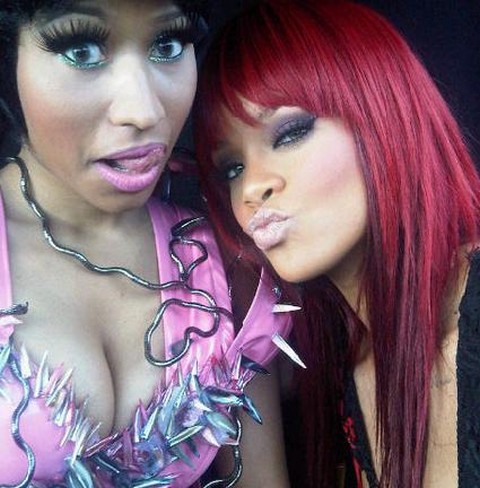 Nicki Minaj has revealed that she and singer Rihanna shared a little chemistry between each other back in 2011 when they start working together. According to the American Idol judge, while she was working on her debut album, Pink Friday, she was working on a song, titled Fly, which needed a hook from someone else, but no one could decide who should end up on the song with her.

The Bajan-singer gave it a listen and instantly fell in love with not only the song, but also the person who sang it. Minaj goes on to explain that after agreeing to have Rihanna sing her part on the song, the 25-year old became very “touchy-touchy”, especially on Nicki’s big badonka-donk! RiRi has become so hands-on with Minaj that it’s almost uncomfortable to look at how desperate she is coming across, as Nicki further explained how Rihanna has previously fondled her at the MTV Music Awards and the American Music Awards.

“Rihanna heard my song Fly and loved it,” Nicki, 30, told i-D magazine. “She sang it beautifully, so now when I see her she of course teasingly fondles me. She fondled me at the MTV Awards and the America Music Awards. I love her. People still didn’t realise were were joking. They were saying, “Oh my God, you’re so lucky.” Of course, Nicki isn’t going to act like she doesn’t like it – because even if she did hate the fact that Rihanna was all up in her butt crack like Jerry Sandusky, she wouldn’t admit it because she’s aware that having top musicians as friends is the key to a long career in the music industry.

Her rival, Lil’ Kim died out from the scene because she was doing the complete opposite, which totally sucks because now, the only woman in the business that can call herself a relevant female rap artist is Ms. Nicki Minaj. Now, before I forget: why is Rihanna such a perverted whore? Is the sex with men – such as Chris Brown – so bad that she is now looking to start a relationship with a woman with a silicone-filled ass? That’s not even sexy! What’s sexy is a woman like Serena Williams… a natural ass with no enhancements. Yum, yum! Maybe Rihanna should try her luck with Serena?

Catch footage of Rihanna and Nicki at 12:35 below: