BY Stormy Elizabeth on April 28, 2013 | Comments: 5 comments
Related : Once Upon A Time, Recap, Television 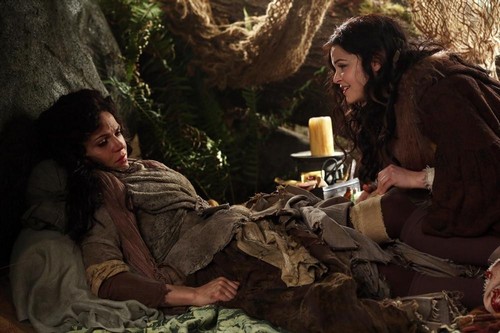 On last week’s show Mr. Gold enlisted the aid of David to help him try to jog Belle’s now cursed memories and get her to love him again; and when it is revealed that the magic beans Anton (Jorge Garcia, “Lost”) and the dwarves have been harvesting have begun to grow and could possibly transport everybody home, Emma was torn over whether she would want to live in fairytale land or stay in our world. Meanwhile, in the fairytale land that was, Rumplestiltskin forced Belle to accompany him on a hunt to kill a thief, whom she had freed in the name of mercy.

On tonight’s show with the aid of Hook, Regina attempts to put a plan in motion that will help transport herself and Henry back to Fairytale land. But her plan revolves around a fail-safe that was planted within the curse, which if triggered could wipe Storybrooke off the map – and kill all of its inhabitants; and Emma’s suspicions about Tamara grow. 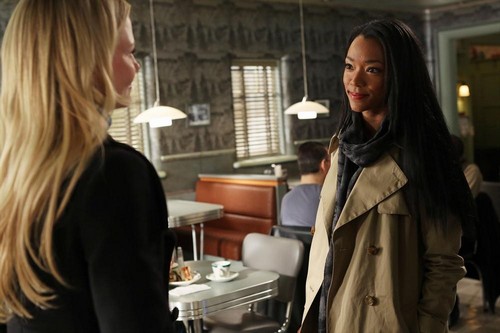 Meanwhile, in the fairytale land that was, the Evil Queen asks Rumplestiltskin to transform her into an unrecognizable peasant in order to kill an unsuspecting Snow White, with the twisted aim of earning the love and respect of her subjects

Tonight’s episode 19 is going to be exciting, and you won’t want to miss it. So be sure to tune in for our live coverage of the season 2 episode 20 of Once Upon A Time — tonight at 8PM EST! While you wait for our recap, hit the comments and let us know how your excited you are about Once Upon A Time being back! Check out a sneak peek of tonight’s episode below!

Tonight’s show opens with Hook, Tamara and Greg/Owen have him tied up.  They claim they want to give him a job.  Hook claims his work is done and they disagree with him, they give him a spyglass so he can see that Mr. Gold/Rumpelstiltskin is still alive.  Tamara and Owen Flynn/Greggwant to help them, because they know how to kill magical creatures.

Greg/Owen wants Hook’s help find his father who was taken in the town, because it was Regina who took him and Hook knows her.

Current time: Mary Margaret asks David if they are going to take Henry back and not take Regina.  David tells her yes, and Mary Margaret tells David Henry won’t be happy.  David tells Mary Margaret they will give Regina a choice to come back with them and live her days out in Rumpelstiltskin’s cell.  Regina is listening and says, “Live in a cell, I don’t think so!”

Back in the Fairytale the Evil Queen goes to Rumpelstiltskin and asks him why people love Snow and don’t like her.  Rumple tells her perhaps because she killed a whole village.  Regina tells Rumple if she kills Snow White people will love her.   Regina asks Rumple to change her appearance.   Rumple agrees and tells Regina the price is she cannot give money to King George.  Rumple wants him bankrupt.  He changes her into a peasant, no one will recognize.

In current time Regina comes to see Henry and tells him she missed him.  She wants to show him something.  She tells him Mary Margaret, David and Emma are growing magic beans and intend to take him back to the Enchanted Forest without her.  She tells Henry that no one can see the good in her.

Regina tells Henry there is a fail-safe and she wants to take Henry to the Enchanted Forest.  Once the fail-safe is activated it would  wipe Storybrooke off the map – and kill all of its inhabitants  Henry gets really mad at Regina and tells her she is going to stop her.  Regina tells him he won’t remember because she puts a spell on him and he forgets everything.

Back in the Fairytale, the Evil Queen walks among the people as a peasant and hears the people saying bad things about her.  She asks whey people are committing treason and tells them that Snow White is the criminal.

The Queens guard comes into the village and she tells them she is glad to see them, but they do no recognize her and take her away.

Current time, Hook comes to visit Regina and tells her she needs his protection.  He tells Regina, Greg Mendall/Owen is in league with a women who wants Hook to betray her.  Hook tells Regina he rather realign with her.

Hook shows Regina the beans she has and tells him if he helps her she will completely destroy Storybrooke and Rumple will die too.

Emma bumps into Tamara at Grannys and Tamara drops her stuff and Emma sees she has a list with names of the inhabitants of Storybrooke and their equivalent Story Book characters.  Emma warns Tamara that if the world finds out about them it would not be good, but she tells Emma not to worry.

Henry overheard them and he tells her operation Cobra is back on and they are investigating Tamara.

Back in the Fairytale, The Evil Queen who still looks like a peasant is being taking by the Queen’s guards to have her head chopped off.  All of a sudden Snow White shows up and saves her.

Current time – Hook and Regina tells Regina that when Rumple is dead, revenge will be gone and he feels his life will be empty.  Regina tells Hook destroying Storybrooke and getting Henry to herself seems like a fair trade.  They go through an elevator and it takes them to a cave that is being guarded.   In the cave the trigger lies and Regina tells Hook she is going to get the trigger and he is going to be the distraction and she pushes him down a hole in the cave.

Hook is caught in the pitt/hole with a demon.  Meanwhile Regina is looking for the trigger, which she finds.  The trigger is a large gemstone.

Henry and Emma are watching Tamara, so they can break into her room.  They see her go by and they head to Tamara’s room.  Henry is hoping if Tamara and Neil break up, Emma and Neil can get back together.  They get the door open and Henry stays outside as the lookout and Emma goes in.

Emma goes through Tamara’s things, she finds nothing and then she hears a squeak on the floor and thinks that something is hidden on the floor.  Neil comes up to the room and he sees Henry.  He goes in the room and finds Emma, Henry asks what she is doing there.

Emma tells Neil that she thinks Tamara is the person who August warned them against.  She tells Neil that Tamara is playing him.  He disagrees, she tells them to let her pull up the floor board and once they look there if there is nothing, she will back off.

They life the floor board and find nothing.  Neil feels bad for her and tries to talk to her, but Emma takes Neil and leaves.

Current Time – Regina comes up the elevator with the trigger and when the elevator door opens Hook is there and Regina is shocked that he survived.   He tells her that he almost changed his plan for her.  But he decided to stay with them. Them happens to be Greg/Owen and Tamara.  Greg/Owen tells her the trigger is not going to work anymore.

Henry and Emma are eating ice cream and he tells her he believes she is right and when she proves it they can go back to the Enchanted forest.

Meanwhile, Leroy, David and Mary Margaret come to the place they are growing the magic beans.  They find the place burned to the ground.  Leroy says, “No one steals from a dwarf!”

Back in the Fairytale – The Evil Queen as a peasant comes in to Rumple’s place and he asks why he did not come when she called.  The Evil Queen tells Rumple he was right the people will never love her like they love Snow.  He asks what she is going to do and she replies, “Punish them.”  She turns back and says, “The Queen is dead, long live the Evil Queen!”

Current time – Regina realizes the cuff/bracelet that Hook gave her is blocking her magic.  Regina recognizes Owen, he tells her, her magic does not work anymore, the cuff is stopping it.  She asks what kind of magic it is and Owen tells her it is science, not magic.  Regina asks if he did all this to find his father.  Owen tells her that is not the only reason, but he is not divulging his mission.  He tells Tamara to bag her.