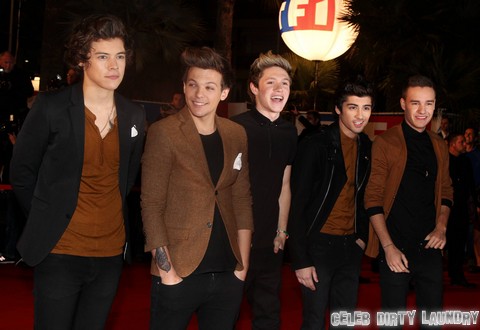 It seems like Zayn Malik is trying to better himself from the mistake he made two weeks ago, when he slept with an Australian waitress named Courtney Webb, who sold the pictures to a news outlet before revealing she finds Zayn disgusting for cheating on his girlfriend – which she says she didn’t even know about. Perrie Edwards, who has been dating the One Direction star for two years, didn’t hesitate to forgive him, supposedly having told him that this would be his last chance with her.

Malik has been doing everything he can to make Edwards realize that he is not going to do her wrong again, – he secretly arrived at one of Little Mix’s shows (the girl group that Perrie is in) in Liverpool to avoid having fans be distracted by his presence. It wasn’t until Malik screamed from a balcony that he loved Perrie when people suddenly realized who it was, and onlooker tweeted: ‘Zayn just screamed: “Love you Perrie! Love you Little Mix!”‘

The 20-year old was in such a great mood that he danced and sang along to all of their songs, before talking to Perrie’s family who were also at the event, showing their support. We kinda wonder what they must be thinking about Malik. He happens to be such a busy boy with his boy band, – they are touring the world later this year which will mean that Edwards won’t get to see her boyfriend for weeks, so for her to think that Zayn could suddenly just stop cheating on her is kind of ridiculous.

Malik also thanked his fans over the weekend who have been supporting him during the past few weeks when Courtney came out saying she had slept with Zayn. The Directioners seem to be a strong fan base, seeing that it didn’t bother them, in fact, they ended up sending death threats to Court (not to be confused with Kourt Kardashian), trying to force her out of Britain. Zayn was impressed by it: ‘Hi everyone, just a quick message to say I love all you guys, without your support I don’t know what I’d do :) x,’ he Tweeted.

Men cheat when they are away from their girlfriends – no matter how loyal they are. This is because they have an urge to get it in… no matter who it is. It’s not that they want to hurt anyone’s feelings, it’s because their other half isn’t around, and having to wait until they see each other again can be very frustrating. Zayn, we’re not even mad at your for what you did. You’re young – enjoy all of that loving you can get.