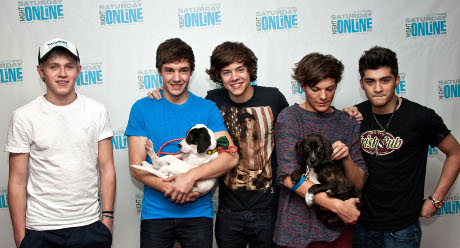 We’ve talked a lot about One Direction over the past several days, primarily because they’re taking popular culture by storm — Beatles mania style. Harry Styles, Zayn Malik, Niall Horan, Liam Payne, and Louis Tomlinson have quickly become some of the most recognized names in the music industry, only after appearing on the popular singing competition X-Factor. Their mentor is none other than the bulldog himself, Simon Cowell, and with that money-making brain behind their success there’s no telling what barriers they’ll brake next.

So they’re in the media. Great. Got it. Everyone knows it. But who’s the sluttiest of the bunch? By now you’re probably whispering to yourself: Wow, is that even a real question? Because you all probably have a sparkly name in your head, and it probably sounds like Harry Styles.

Poor Harry Styles has been catching a lot of nasty-points in our series examining One Direction, but that’s simply because the media follows him incessantly, especially after his bout with  Taylor Swift in what was an overall brief love affair. During his time with Taylor Swift, Harry allegedly flirted heavily with other girls and post-split information revealed that Harry Styles probably-definitely-duh-duh was sleepin’ around even while he was in a supposed “committed” relationship with the Country music’s biggest heart breaker.

Who do you think is the sluttiest in 1D? There are several single Brits in the band. Who do you think they should start hooking up with to get their names in the news like Harry?