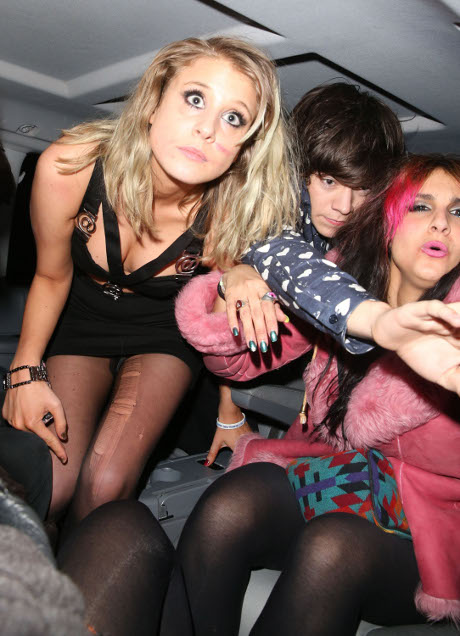 So which bandmate from One Direction got a special stripping surprise on his birthday and loved it? Harry Styles. Over the weekend, Mr. Harry Styles turned 19 years old and was taken into custody by a happy birthday stripper. Apparently, the young 1Der couldn’t stop cracking up. According to Styles, he says he was in absolute “stitches” (translation: he was laughing really hard) when his pal DJ Nick Grimmy Grimshaw said he had to go get the birthday cake and instead returned with a happy birthday stripper.

“It was great. I was in stitches,” Styles tells The Sun (via TVNZ). “The funniest part was that when she finished she said, ‘I’m really sorry I couldn’t find my truncheon so I had to bring my nunchucks’. That was a bit weird.” We hope the underage 1Der wasn’t roughed up too badly. While I don’t think this stripper really used them to literally beat him up, I know who might enjoy putting a few good nunchuck smacks into that shiny British face of his . . . . Taylor Swift. Who else?

Harry celebrated his birthday at The Alibi in Dalston, East London. Many of his friends attended, and apparently he wasn’t at all expecting the happy birthday stripper. But he isn’t hiding the fact that he really enjoyed the festive experience.

“Grimmy said I had to sit there because he was bringing a cake,” Styles reveals. “He started telling everyone to be quiet but I could see the cake in the kitchen and the candles weren’t lit, so I was like, ‘What’s going on?’ Then Grimmy said, ‘Someone in here is under-age’ and I saw a police hat bobbing through the crowd. I was like, ‘Oh no!’ The stripper didn’t really say anything, she just began her routine. I have never seen my manager run so quick to cover the CCTV cameras but the pictures got out anyway.”

Styles also revealed that he’s putting the brakes on his romantic life, saying that he and the band really need to buckle down where work’s concerned. It’s not like they’re falling out of the spotlight or anything. They simply want to work hard to put on good shows for their fans. I’m sure it had absolutely nothing to do with his managers telling him that he needs to behave himself and put a damper on all the crazy boy-bander antics . . . .