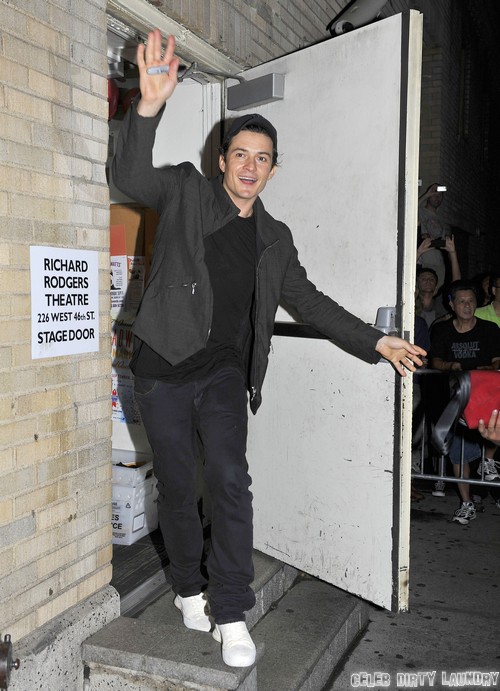 So production of Romeo and Juliet has begun on Broadway, with  Bloom playing Romeo and Condola Rashad playing Juliet. It’s an updated take on the Shakespeare classic, set in the modern era, but the two warring families in this version are separated by race.

Orlando’s been taking a break from acting for the last few years to spend time with his family and raise his young son, but he’s slowly been choosing strong projects to bring him back into the acting fold. Instead of jumping back into a big-budget film, he’s going to Broadway and doing smaller films. It’s a smart choice, and rumor is that Romeo and Juliet is already selling its shows out.

Now, there’s nothing to back this up, but there are reports that Orlando and his co-star Condola might be getting too close on set. About a month ago, a report from Star Magazine claimed that Miranda Kerr was worried about Orlando and Condola getting ‘too close’, with a source explaining, “She’s steamed about how close they’ve gotten during rehearsals. Her friends talk about the hot chemistry between Orlando and Condola… she confronted him and he confessed to being taken with Condola but swore that was it. He insisted it was only professional.”

Of course it’s professional. Poor Orly has to deal with Miranda being hit on by hundreds of men on a regular basis, and there are actually more rumors that she’s cheated on him than the other way around. Besides, Orlando doesn’t seem like the guy to cheat on his wife, and he genuinely seems very devoted to Miranda and his son. And really, he’s supposed to have strong chemistry with Condola to sell the damn play – how could Miranda be upset about that?

What do you guys think? Do you think Orlando would ever cheat on Miranda with his co-star, Condola Rashad? Let us know your thoughts in the comments.