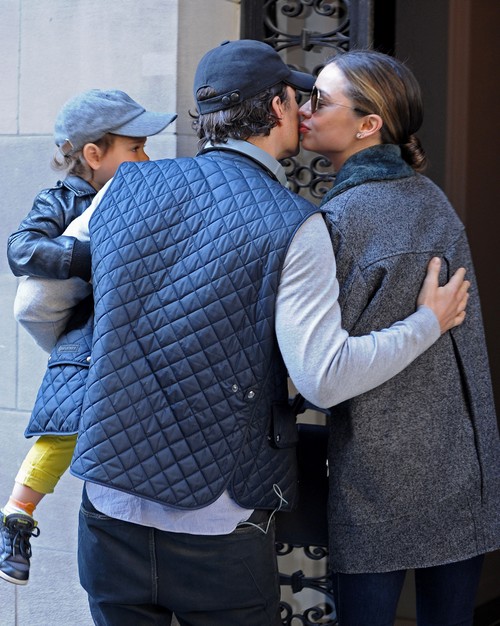 Orlando Bloom and Miranda Kerr aren’t playing by the unofficial rule book, are they? Usually, when high-profile celebrity couples separate, the tabloids are awash with conspiracy theories on their breakup and their ensuing ‘bitter’ divorce battle. However, Miranda and Orlando have sidestepped all that speculation by showing the world that they’re still on great terms, and they will continue staying a family for the sake of their son.

Days after they announced their divorce, Orlando and Miranda were spotted being affectionate, hugging and kissing, together with their son, Flynn Bloom, in NYC. Then, a day after their first photo-op, they were once again spotted being affectionate and doing the same thing. It’s obvious that they’re also calling the paparazzi, because the kisses and the hugs seemed too strategically timed for it to be natural.

I’m sure that Orlando and Miranda’s most important incentive to stay on good terms is their son. Divorce is difficult for the children, especially such young children who won’t necessarily understand what’s happening and why things are changing. Whatever else they may be, it’s clear that Orlando and Miranda are good parents and they’re not going to risk their son’s well-being no matter their personal decisions. However, it’s also obvious that they either still have an enormous amount of affection for each other, or they’re terrific actors faking it for their son and for the camera.

What do you guys think? Are Orlando and Miranda pretending for the cameras, and to preemptively stop the speculation from the tabloids? Or are they doing it for their son, to keep it as normal as possible for him? And is there a chance that they’ll get back together in the future? Let us know your thoughts in the comments.

Orlando Bloom and his wife Miranda Kerr take their son Flynn for a walk together on October 28, 2013 in New York City, New York