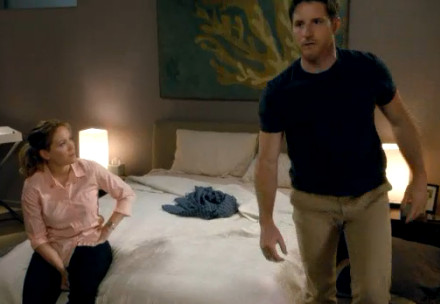 Tonight, the hit show Parenthood airs on NBC with its second episode of season 5. The episode is titled “All Aboard Who’s Coming Aboard” and will continue with several of the story lines that were established in last week’s premiere. Jasmine and Crosby will continue to deal with their new baby’s incessant crying; Kristina will continue to explore her options to launch her political career; and Hank will finally work up the courage to visit Sarah — and, in the process, offer up some wisdom regarding Amber’s decision to marry so young. If you missed last week’s episode, CLICK HERE for a full recap.

Brief episode synopsis: Parenthood Season 5 Episode 2 “All Aboard Who’s Coming Aboard”- An Amber (Mae Whitman) alert rocks the Braverman family while Jasmine (Joy Bryant) and Crosby (Dax Shepard) have to walk on egg shells as the baby’s crying begins to take a toll on Jabbar (Tyree Brown) too. Julia (Erika Christensen) meets a school parent volunteer Ed Bliss (David Denman) and finds they have a lot in common.

Meanwhile Adam (Peter Krause) and Kristina ‘s (Monica Potter) “wedge” issue could be the campaign itself. Hank (Ray Romano) makes a surprise visit to Sarah (Lauren Graham) but leaves her with some advice on how to have an important talk with Amber, however, Adam’s opinion on the subject is in direct opposition. Zeek (Craig T. Nelson) does not want to talk with Camille (Bonnie Bedelia) about the next stage of their life.Also starring Sam Jaeger, Max Burkholder, Miles Heizer, Savannah Paige Rae, Xolo Mariduena, Matt Laurie.

Will you be watching tonight’s episode? We will! Don’t forget to come back here later tonight at 10 PM EST to get your full LIVE recap. What are you most looking forward to on season 5 of Parenthood?

Jabbar can’t take the crying. His parents can’t even wake up on time to take him to school. The first day of school actually. Julia can’t take the frantic drop off either. She wants to get her kid signed quickly and she ends up getting derailed by a dad that needs her to watch his kids while he runs back to the car and get their lunches. By time he comes back and they make it to the sign-up sheet, her brother takes the last good one.

They’re stuck teaching kids how to be green. They do it so embarrassingly that Julia’s son doesn’t want to be seen with her. Yeah, they became those parents.

Kristina is interviewing campaign manager when suddenly they change positions. Her interviewee wants to know how she plans on winning and wants her wedge. If Kristina can’t sell those then she’s out of luck. Kristina knows why she’s running and after a few of her viewpoints the interviewee assigns herself to the job.

Later there is a whole tea working on Kristina’s campaign. Probably too many people seeing as she didn’t warn Adam that these strangers will virtually take over. Luckily Max isn’t there to get upset. He was with Hank unknowingly telling him the good/bad news about Amber. Although Amber originally wanted to wait she busted out the engagement surprise after everyone welcomed back her now fiancée. Her mother doesn’t like the idea and is currently talking to her about it unbeknownst to Hank.

Adam is getting prepped to be the man behind the woman. Heather needs to know every dark secret he ever had just in case any of it will come back to bite them. He tells her everything and that includes she could have lived without knowing. That’s when he reveals none of this matters. He “supports” his wife but he doesn’t think she’s going to win.

Sarah worked some doubt in the engagement. She asked Amber how Ryan planned it and was it everything she hoped for. Amber does question Ryan about it when they’re alone. He admits he didn’t plan anything. It was completely spur of the moment.

Heather warns Kristina that Adam may not be on board. She doesn’t reveal what Adam said t her but she does makes sure that Kristina is going to make him on board. If her husband can’t support her then the voters will notice. That’s why Kristina needs to have a chat with him.

Jabbar really can’t stand his sister. Ever since she came all she does is cry. Which in turn makes his parents constantly warn him to be quiet. Some heart to heart chat with Crosby makes lay off of the tantrums for a while. To make it up to him Crosby takes the whole family out to dinner but the baby gets them kicked out. Not even strangers like his baby. Crosby couldn’t take the added stress and he lashes out at everyone in the restaurant before he follows his family who were lucky to leave prior to his hissy fit.

At first Kristina was going to ignore Heather’s warning but when she tries to practice her speech she notices Adam’s disinterest. She calls him on it. He keeps saying he’s behind her but no one believes him. Kristina has to push him to get him to say he doesn’t want her to run. He wouldn’t take it if all this stress on her got the cancer to return. He didn’t want to lose her and that’s all he sees her Mayoral campaign as doing.

Hank stops by Sarah’s and doesn’t express a strong opinion on Amber’s engagement. What he does do is tell Sarah to be honest with her daughter. She wants to do that but she’s still on the fence so she goes to Adam for advice. He warns her that she has to be careful or she’ll drive her daughter away. Exactly like their dad with her.

Zeke and Camille may move. Camille wants to sell the house. There are merely too many problems for them to fix and it’s not as if they’re kids come by that often anyhow. Maybe they should have a fresh start.

Julia bonds with the dad from earlier. His name is Ed. They’re both out of work and struggling with that. Also they’re going to stuck together for the school year. That might as well get along.

Sarah asks Amber if Ryan is the one. Once she gets a yes she offers her services in planning the wedding. At the end of the day she’ll support her daughter no matter what. Even if she has to swallow her own apprehensions. The same for Adam. When it came time to stand by Kristina then that’s what he did.