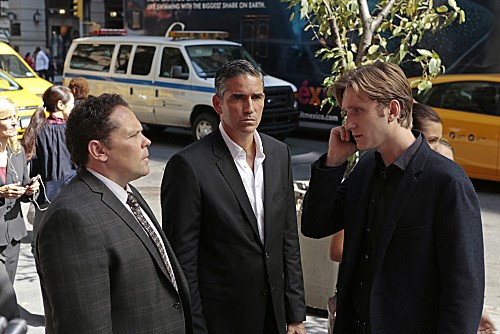 PERSON OF INTEREST comes back for its 6th episode in its third season and we can’t wait to see what happens tonight on the new episode entitled “The Perfect Mark.”  On tonight’s show Carter tracks an antiquities dealer whose business is connected to the crime organization HR.  Did you watch last week’s episode?  We did and we recapped it right here for you!

On last week’s episode freed from her psych ward confinement, Root received a directive from The Machine that required Shaw’s assistance – by any means necessary – and took extreme measures to gain her compliance. Also, Reese and Finch looked for clues as to why a mild-mannered estate investigator’s number had came up.  Kirk Acevedo guest stars as Timothy Sloan.

On tonight’s show the number comes up of a hypnotherapist whose life, upon investigation by the POI team, suggests he is more than just a master of the mind. Meanwhile, Carter tracks an antiquities dealer whose business is connected to the crime organization HR.

Tonight’s Person of Interest Season 3 Episode 7 is going to be exciting, and you won’t want to miss it. So be sure to tune in for our live coverage of the new episode of Person of Interest — tonight at 9PM EST! While you wait for our recap, hit the comments and let us know how excited you are about the show. Don’t forget to come back at 9PM for our LIVE recap!

Finch had to go to therapy and no any old regular session. Reece listened in on his time with Hypnotherapist. It seems the good doctor’s number came up. But he may just have numerous enemies. Too many to count. The doctor happens to be a con artist. He’s not even a registered doctor. He uses his chair to get clients to open up on and help him get past all of those pesky security questions into their bank account.

He did it to Finch and he’ll do it to others. But that’s not the only con he’s running. He also conning me into making investments and he’s conning the guy that is helping him con others. There isn’t one person in his life that hasn’t lied to. Including the woman he’s in love with. She doesn’t know that their dream vacation will be paid off in blood money. After witnessing him for only a day, Shaw wants to kill him.

In the interim, Carter is milking information on Kyle from his godfather. She brings up HR with him but when he offers to help with the investigation; she turns him down. A good thing seeing as he yet another spy set to keep her in line.

Finch has Reece and Shaw look in every one of Hayden’s clients. While he will be going back to therapy. He wants to question the doctor but he couldn’t play the player. Hayden became suspicious when Finch had asked one too many questions.

In a surprising turn of events, the team’s case collides with Carter’s. Her rookie was recently asked to kill someone. That’s a huge step up in his duties and Carter can’t wait to gather as much as she can for evidence but the Swede turns out to be a patient of Hayden’s. Hayden, who apparently had taken a shine to the Swedish antiquities dealer ( probably wants to rob him further),followed him one day. It the same day that HR was pointing out to the Rookie who he should kill. When HR’s associate spots him, he begins to wonder why a therapist is so involved with the man that ruined their money laundering scheme.

The dirty cops eventually learned the therapist was a con man. They now want to do a two for one special. At the very same time Hayden asked his girlfriend to travel the world with him. She accepts and he needs enough time to destroy any evidence of his “practice”. He was in the middle of shredding when Reece and Shaw had to save him masked cops.

They bring him back to Finch’s and finally get the whole story. The reason HR wants to kill Sven is because of him. He stole money from the guy with the ever changing bank account thinking no one will catch on. But there’s more. However Reece and Finch don’t realize until after Hayden used his girlfriend to give them the slip. He had broken into Sven’s email. He changed the wording in order to get the big buy out Sven was supposed to be getting.

The way the laundering works is that Sven uses the dirty Russian money to bid on fake objects put up on auction by HR. That way they can put the money into their accounts without raising any red flags. Hayden made him bid on the wrong item. It was a legitimately wealthy item. Sven didn’t know that and so he sold it to a kid for five bucks. The very same kid that went on to sell the ball worth 4.4 million to Hayden for a lousy twenty bucks. Poor kid and poor Sven.

Carter and Fusco arrange Sven’s “death” in order to get him and her rookie off the hook. Unfortunately, HR called after the arranged everything saying they need to talk to Sven. They know he bet on the wrong item and their wondering where their money went.

Hayden will make a break for it but not without Natalie. He honestly does love her and after convincing her to hear him out he’s all set to meet her when Reece and Finch show up. They allow him to say goodbye to Natalie only to learn it’s too late. HR Has her.

Luckily Carter and Shaw got his girlfriend out of harm’s way. But Hayden’s negotiation with the crooked cops goes south. The ball he has is a fake. The team save him but where is the real ball? Well, the kid still had it. He was holding onto it to give to Natalie for a hundred. She called to taunt and bid farewell to Hayden She was using him the whole time.

Hayden is broke and has people looking for him. Reece suggests he reopen his offices somewhere else. Right now HR is out for blood.

Finch and Root are only discussing their new relationship. They might even make peace with the way the machine is functioning. As Root says he was the beginning but she was the end.

The Rookie was giving Carter the low down on everything he found so far when they were interrupted by another dirty cop. Before they knew he drew a gun on them and shot the Rookie. Carter shot the cop but she couldn’t save her partner. In his final moments of life she asked the cop to identify who they report using the photos the rookie had taken earlier. He identified Kyle’s godfather.