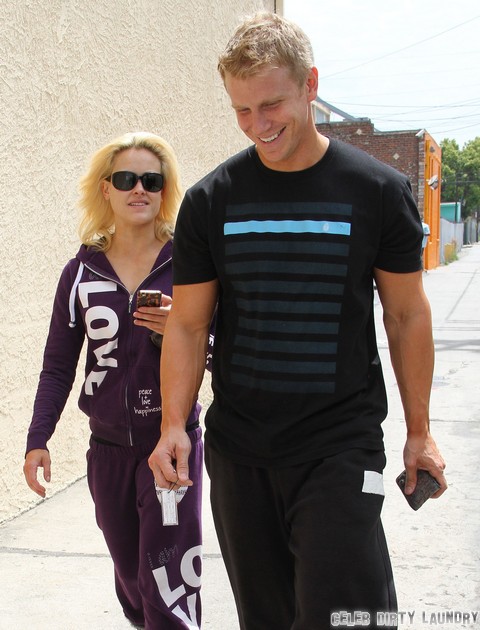 Sean Lowe‘s wedding to Catherine Guidici will be televised in January, with hundreds of Bachelor fans invited to watch. But one person who hasn’t been invited? Sean’s Dancing with the Stars partner and good ‘friend’, Peta Murgatroyd.

Peta tells In Touch Weekly, “I’m not invited to Sean and Catherine’s wedding. I’m disappointed about it.”

Apparently, the reason for Peta’s snub is that Catherine is ‘jealous’ of Peta’s close connection with Sean, and she reportedly doesn’t want to take any chances. A source tells In Touch, “Catherine was very jealous of Peta. Sean and Peta were spending so much time together and Catherine felt like she had to compete for his affection.”

Yeah, and I’m sure the fact that Peta is gorgeous and talented had nothing to do with Catherine’s insecurity. Also, who really expects Sean and Catherine to last? If I was Catherine, I wouldn’t be very secure in this relationship either. Sure, they’re going to have a big televised wedding for millions of viewers to tune in and watch, and live the fairytale ending of a happy marriage. But the illusion will shatter as soon as Sean and Catherine realize that they can milk their divorce and separation for another couple of years, guaranteeing them much more time in the spotlight.

Of course, the couple still lives separately, which isn’t a sign of anything wrong. No, not at all. Sean even claims, “We’re stronger than we’ve ever been. And not to sound too cliched, but I fall more in love with her every day.” Right, they’re so in love that his fiance feels the need to not invite his dancing partner to the wedding.