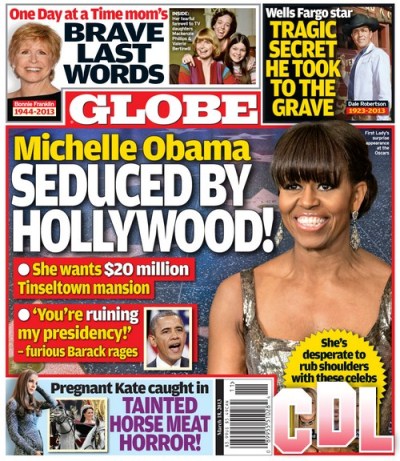 The cover of this week’s GLOBE Magazine features a shocking report about Kate Middleton caught in a scandal involving tainted horse meat! Just yesterday the Duchess of Cambridge announced, accidentally, that she is expecting a daughter and nobody wants her pregnancy jeopardized by tainted horse meat.  Of course we don’t yet know any details of this new scandal so we can’t say if Kate’s health  has been placed at risk.

Another take on the tainted horse meat story is that the Middleton family might be involved.  Kate’s parents, Carole and Michael Middleton, are business people and not above using their royal connections for profit.  With news of horse meat winding up in everything from franchise fast food to supermarket offerings we can’t be sure if Kate’s parents might somehow be implicated.  Only when we read the March 18 print edition of GLOBE will we learn all the details.

GLOBE announces that Michelle Obama is being seduced by Hollywood and President Barack Obama is not pleased!  GLOBE reports that the FLOTUS wants a $20 million Tinseltown mansion so she can effectively attend to her new passion which is to “rub shoulders with these celebs.”  Meanwhile Barack furiously rages that Michelle and her celebrity entertainment ambitions are “ruining his presidency.”  What do you think?  Were you proud as an American to see Michelle announce the winner of the Academy Award for Best Picture or did you find it inappropriate?

GLOBE lines up a winning set of stories this week and I can hardly wait to read my copy.  From the British Royal Family to the White House GLOBE’s secret sources unearth the details that make all the difference – then they put it together for us perfectly every time.  Without exception I can rely upon GLOBE to deliver the inside story and keep me entertained and well informed each week.