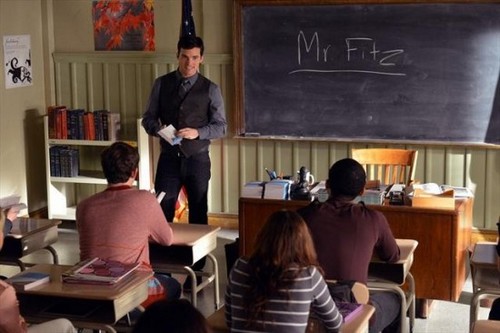 Tonight on the ABC Family PRETTY LITTLE LIARS airs called “A dAngerous gAme” On tonight’s show which is the season finale, Spencer is back home and presenting a good front, but Aria, Hanna and Emily are not so sure their friend is fully back after seeing how fragile she was just a day or so before.  Did you watch last week’s show? We did and we recapped it here for you!

On last week’s show as “A” continued to play games, the stakes were raised higher as each girl was forced into difficult positions. Aria started to seriously contemplate her relationship with Ezra as his new family situation continued to eat away at her. Hanna was thrown into the middle of Caleb’s family drama when Jamie’s shady past came back to haunt him. Emily was determined to prove Spencer wrong in hopes of helping her, but she was not be ready for what she founds. Meanwhile, Spencer searched for answers about Mona’s time in Radley Sanitarium.

On tonight’s season finale, the Liars are seeing red as they attempt to put an end to the game in “A dAngerous gAme.  Spencer is back home and presenting a good front, but Aria, Hanna and Emily are not so sure their friend is fully back after seeing how fragile she was just a day or so before. Unfortunately the girls don’t have much time to ponder Spencer’s health as shocking revelations are brought to the forefront. With so much happening and new information being uncovered, will the Liars be ready for what is waiting for them?

If you tuned in last week you saw Spencer chucked into a hospital after a full nervous breakdown. It was a quick stay and she just returned home to be greeted by Aria, Hannah and Emily. Mona is sitting in a dingy basement with a guy in a hood plotting her next move. Meanwhile Mona’s step-sister is on the phone in a panic when she gets a text from A who is standing outside of her house, peering in the window.

Hannah is angling to get a bit closer to Ezra and she decides that the best way in is to babysit his long lost son. He agrees to give her a test to see if she and Malcolm are a good match. Ezra has been given 24 hours to decide whether or not he’ll take a job that he needs. He keeps the info from Aria until her father clues her in. Aria thinks that they’ve lost whatever it was that pulled them together in the first place. He tells her that if she’s not happy they can split. She tells him to take the job which will pretty much end them.

Seeing Tobey dead is supposedly what caused Spencer to lose her marbles, but he is in fact alive and well. He strolls into the diner to sit down with A and is surprised to find Spencer waiting in a hood at the table. He tells her that everything he has done has been to protect her.

He says that he has done everything to keep her safe from Mona. He brings Spencer to a hotel and tells her that red coat is the one in charge and he knows little else about her.  Spencer and Tobey share a kiss and the end of their talk.

Hannah is talking to Malcolm who claims to have seen a woman who said her name was Alison or “A”. He goes through Hannah’s phone and stops on a photo of Spencer. Malcolm swears it was her that called herself A. Hannah and the girls decide to set up Spencer. Hannah wears a red coat and Spencer chases after her proving that she has no idea who should be in that coat either. Aria and Emily join the two in the bathroom as Hannah realizes that Spencer is still one of them.

The girls tell her that she can trust them with the truth. Spencer tells them that Tobey is alive and the party planned for tomorrow is a set up. Mona wants everyone all together in the same place for awhile but now they may have the upper hand..

Mona, Spencer and Tobey are waiting at the house for the party while the girls sneak in an upstairs window.  Tobey takes Spencer outside to “Take care of her” and once in the woods he tells her what to do if things go wrong. As they are talking Aria, Hannah and Emily surround a hooded Mona.  Within seconds a ring of fire erupts around the house and none of them can get out. They realize that Mona also has no idea who red coat is.

The fire rages and the girls all wake up outside. Mona says Ali was there in the red coat and dragged them out. Hannah saw her too. The girls get back into town and find a police car that was dragged from the lake. In it is proof that Jenna and Shawna were involved. The season wraps with an arm reaching up from beneath the ground.