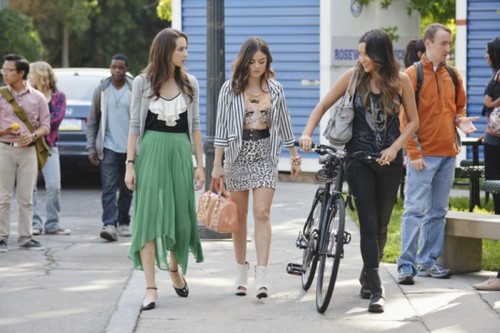 PRETTY LITTLE LIARS returns to ABC Family tonight with its Winter Premiere called “She’s Better Now.”  If you have never watched the show before Pretty Little Liars follows four estranged best friends who are reunited one year after their best friend and queen bee of the group, Alison, goes missing – only to discover they’re receiving messages from an anonymous “A” who knows all their secrets.

Last time we saw our ladies in October Aria, Emily, Hanna and Spencer were looking forward to some good old Halloween fun now that the traumatic events with Nate were behind them. But once aboard the Rosewood Ghost Train, the girls were in for much more than just some childish trick or treats. With “A” running amuck and unexpected party-goers popping up at every turn, this Halloween event became one killer party.

On tonight’s episode Radley Sanitarium has given Mona a clean bill of health and she is headed back to the halls of Rosewood High, much to the Liars’ dismay. With their former tormentor now back in their everyday life, Aria, Emily, Hanna and Spencer take very different views of the “new” Mona. She made their lives a living hell… Is she really cured? And what other secrets could she be holding onto? It’s up to Mona to prove to the Liars if she has changed or not.

Recap begins now. Read below to find out what happens on tonight’s episode . . . .

It’s finally back! Tonight is the season premiere of Pretty Little Liars and it hits the ground running. Hannah was awakened by Mona who had been in a nut bin and is hoping that Hannah will help her fit in at school once again. Emily asked her father if Paige can stay over, but there’s a catch- she and Paige can’t go out. It’s not acceptable. Aria and Spencer were at a coffee shop trying to figure out what to do. They’re worried about Mona going to school and that takes center stage until Spencer suggests that maybe her dad drugged her. Maybe Mona isn’t responsible for everything.

Hannah has a quick chat with Caleb and asks him to do some investigating. When Hannah was in the box on the train she stabbed someone with a rusty screw driver and maybe they are still affected by it. Spencer and Toby are still dating but she has absolutely no idea that he is with the A Team. The creepy janitor at the school has all of Mona’s props from the resort on full display in his room at school. The girls are starting to think he’s more involved than anyone else realizes.

Caleb clues Hannah and Emily into an interesting bit of info. Mona’s parents didn’t make her go back to school, she actually begged them to let her go. Aria’s dad comes to her room to check on her and she gets brave and starts asking him about Allison. She wants to know if he liked her and questions whether or not he spent anytime with her. He says of course he liked her and never had any alone time with her, but aria doesn’t look convinced.

Hannah grills Lucas on Mona. He caves a little and tells her that Mona was sneaking out of the hospital long before the doctor’s okay ed it.

Emily’s dad has her on total lock down. He leaves her alone after setting the security system for the house in an attempt to lock her in. She manages to disarm the system through her phone and climbs out the window to escape and meet up with the others. The girls all sneak downstairs to the janitors room to go thru his stuff from the resort. They find Allison’s diary and in it she talks about Aria’s father and how she basically was blackmailing him. Aria rips that page out and takes it with her.

After the school track meet a phone booth goes up in a ball of flames as the girls look on in horror.

Meredith, Aria’s father’s ex, was hurt in the fire. Emily’s father realizes she snuck out and he tries to talk to her and relate to her. Meanwhile Aria’s father is flipping out thinking that she or her friends set Meredith up because she had received a note directing her to the phone booth.

Tune in next week to see what The A Team is up to next!