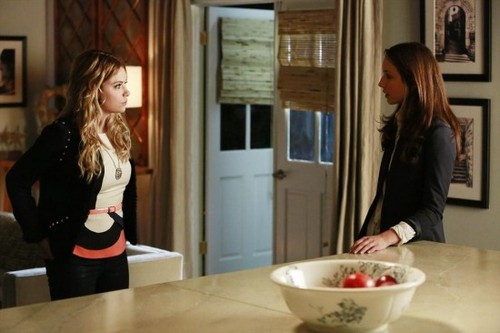 In a special sneak peek, we’re going to finally end some of this never ending confusion. Last week we saw Hanna’s desperation over her mom. Which is perfectly understandable once you anyone starts getting proof their mom committed murder but on episode 4 we saw what was formerly known as understandable turn into “A” territory. In other words freaking dangerous and nearly psychotic.  Hanna started out by lying to the police and do her girl scout best of trying to squeeze info from a seasoned detective. All of these things only made the detectives even more curious. So congrats Hanna for possibly getting all of your friends and boyfriend pinpointed as accomplices. When would anyone in Rosewood learn?

Warning*******If  you’re reading pass this area please be warned; there are nothing but sneak peeks and spoilers past this point********Warning

All of these secrets the girls keep from each other is always going to come around and burn them. Why don’t they get that. Tsk…Oh well.  In tonight ‘s synopsis the story goes: Spencer and Emily make plans to visit a nearby college, but they have very different agendas for their time spent on campus. Spencer’s singular focus in figuring out Ali’s apparent connection to the school contradicts Emily’s real fears about her plans for after she graduates. And after a stinging attack by “A”, Aria and her brother Mike don’t see eye to eye regarding what’s best for their parents. Meanwhile, Hanna becomes increasingly frantic when she makes another horrifying discovery among her mom’s things, leading her to make a desperate move – with disastrous results.

In non-cryptic speak, Spencer is on the brink of ruining any chance of a future Emily might have, Aria’s brother won’t be too happy with his mom leaving him, and Hanna will most likely be using the gun from the promos. As you could see, sometimes “A” doesn’t even have to do too much. The girls tend to self-destruct. But in a suprising move the girls aren’t the only ones freaking out as usual. The moms are having a tough time as well.

Knowing that her son, Mike, doesn’t approve may have already caused Aria’s mom’s mind about her trip. Otherwise why else would she be snapping at the girls. Aria gave her permission in order for her mom to be safe from “A”. However what she didn’t consider was how Mike, who doesn’t know the full heinous extent of Aria’s nemesis, may just want his mom to not ditch him for a young guy.  Aria is the one heading to college soon, not Mike. He’s going to need his mom.

Then there’s the infamous Ashley Marin. Did she kill her ex because its starting to like she did. Why else all the lies and then going to Spencer’s mom to hire her as  a lawyer. Sorry Ms. Marin, you look guilty. Even Spencer’s mom suspects she  did it. That’s why she didn’t ask just said she reach out to her contacts in the police departments. Now if only Ashley tells her daughter all of this. But she doesn’t. How else can you explain why Hanna is walking around a possible murder weapon.

The only light for anyone at the end of the tunnel is when Spencer gets closer to finding out who Allison kept calling. They manage to track it down to a college. Yes a college Emily, the now defunct swimmer,  needs to think seriously about. If Spencer refrains from running around pinpointing every guy for statutory canoodling; Emily might have  chance.   I guess we just have to wait and see.