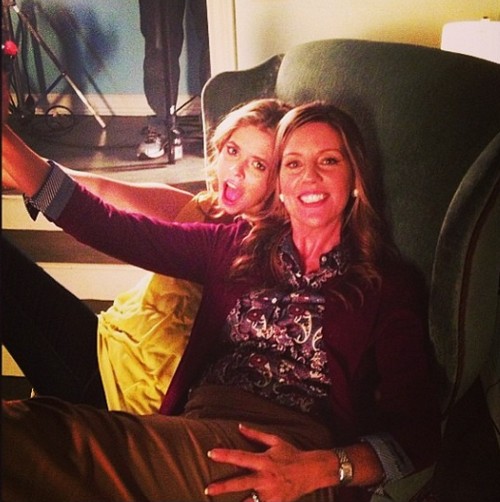 The Pretty Little Liars cast and crew have been blowing up Instagram and Twitter this week, celebrating the fact they have officially wrapped Season 4 filming. Even the Liars’ hair-stylist Kim Perry got in on the action, and posted a photo of Sasha Pieterse and Andrea Parker relaxing in a recliner on set after shooting the final episode of Season 4, on her Instagram. You most likely know the duo as Alison DiLaurentis and her mother, Mrs. DiLaurentis. So, that’s not unusual, right? Wrong! Alison DiLaurentis is sporting her infamous yellow shirt, the same one she was wearing the night she was buried alive and disappeared.

We have seen her in her yellow shirt dozens of times, via flashbacks, throughout the first three seasons of Pretty Little Liars. We know that the night she disappeared she argued with Spencer (Troian Bellisario), went to the “Kissing Rock” with Ian, paid Toby Cavanaugh a visit, pretended Garrett killed her with a field-hockey stick, and then proceeded to blackmail Byron Montgomery about his affair. (She was a busy girl that night!) Then, she was buried alive, and pulled out of the shallow grave by Mrs. Grunwald. So, how does Mrs. DiLaurentis fit into that timeline?

In the photo Alison doesn’t appear to be muddy or disheveled, so it is safe to assume she didn’t run to her Mommy after she was pulled out of the hole in her backyard. Which only means one thing, she was with Mr. DiLaurentis BEFORE she was buried alive. We know from previous seasons’ flashbacks that Alison was alive and well after all of her interactions with other people that night, and it was clear the last person to see her alive was not any of the above mentioned people (Toby, Ian, Garrett, Byron, Jenna). Could Mrs. DiLaurentis be the missing link, the last person to see Alison before she was thrown into a hole and left to die? Alison and her mother’s relationship was far from perfect, perhaps Mrs. DiLaurentis finally snapped, and attacked her own daughter.

Unfortunately, we have to wait until January for answers. Pretty Little Liars will return to ABC Family on Tuesday, January 7th at 8:00 PM.