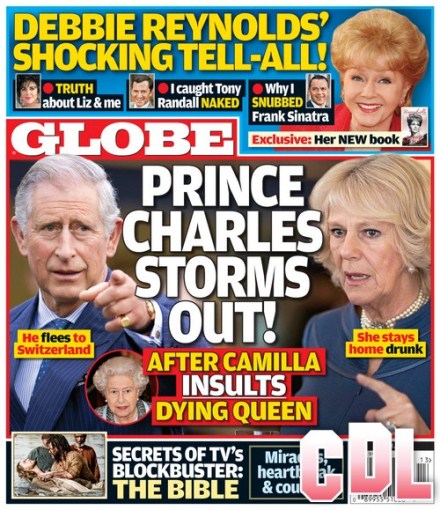 Prince Charles has finally has all he can bear and has stormed out on cruel Camilla Parker-Bowles!  GLOBE breaks the news that Charles has flown off to Switzerland in a royal huff after his dying mom, Queen Elizabeth II, was insulted by his wife.  As we all know the Queen has been very ill and was hospitalized recently due to the serious nature of her condition.  As GLOBE reported, Elizabeth left hospital against her doctor’s advice in order to put up a brave front and forestall concern that she is in fact dying. “Her royal majesty refused to stay another minute in the hospital. She insisted on going back to the Palace in a bid to stop speculation about the gravity of her failing health.” according to a GLOBE source.

In this week’s April 1 print edition, GLOBE explains the nature of the Queen’s urgency to adopt a facade of health and how this relates to her son’s battle with Camilla.  Of course we won’t know the truth until we read the GLOBE but in the meanwhile let us speculate as to why Camilla would insult her mother-in-law and how this led to a battle with ineffectual Charles.  Let’s assume that all Camilla cares about is Charles retaining his traditional rights of ascension which will place her as Queen Consort.  As far as Camilla is concerned she will be Queen if Charles is King.  Camilla is especially anxious since Prince Charles has already hinted at his own impatience for his mom to die in an obnoxious public statement a few months back.  But there is a big problem for Camilla now that Kate Middleton is pregnant and set to deliver a royal heir!

Elizabeth made a promise to Kate that if she bore William a child that she would then bypass unpopular Charles and creepy Camilla and make William King instead.  GLOBE reported that Camilla lost her head when she learned this and began to plot to poison the Queen’s mind against her grandson and his lovely wife.  But this attempt to influence Elizabeth has been failing and Camilla has resorted to hurling crude insults  at her majesty!  There is no surprise here really since Camilla is a drunk who can hardly control her behavior.  Apparently Charles had enough and could no longer stand by and watch his sick mom abused so he fled to Switzerland.  Not very gallant at all.  Perhaps sending Camilla for another alcohol detox would have been be a better solution than simply removing himself from the scene.

Debbie Reynolds has a shocking tell-all book coming out!  We learn the truth about her relationship with Liz Taylor – imagine what that might be.  Tony Randall NAKED!  Yes, that’s another thing Debbie will tell us all about.  We will learn in GLOBE’s exclusive book review why Debbie snubbed Frank Sinatra and loads of other Hollywood insider facts.

GLOBE features an in-depth look at the TV Blockbuster ‘The Bible.’  Miracles, heartbreak and courage are all detailed for us in this week’s print edition.

GLOBE allows me to relax and enjoy myself while I keep up on the most important stories of the week.  No other magazine features research and reporting that tears the lid of otherwise well-kept secrets the way GLOBE does.  When I get my copy, which will be this afternoon, I’m heading right to my favorite chair to learn what will happen with Charles and Camilla now that he has left her.  The palace corridors must be resonating with talk of the consequences of this latest scandal and I know that GLOBE’s inside sources will report it all!  GLOBE remains a bright spot in my week – make it one in yours.