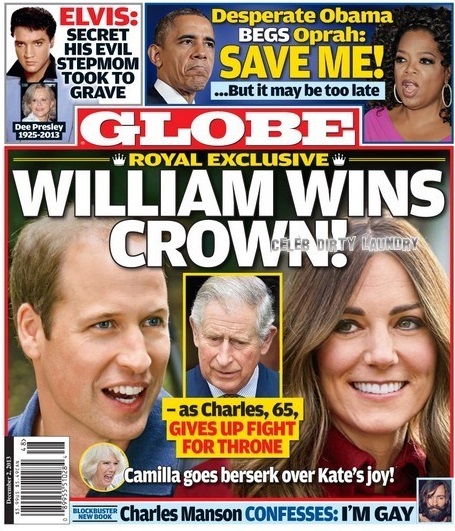 Kate Middleton may have had a case of gray roots a few weeks ago but it looks like she’ll be able to cover them with the royal crown sooner rather than later! That’s because her husband, Prince William, will indeed be crowned the next King once Queen Elizabeth abdicates next year. According to an exclusive in the Dec. 2nd print edition of GLOBE Magazine, Prince Charles has done his fair share of thinking and finally realized that stepping aside in spite of his traditional rights as heir is really what is in the best interest of the British people.

Queen Elizabeth has wanted to find a way to have William lead because he and his wife are both respected and now as new parents, relatable. If you stripped them of titles, money and power they would be like a lot of other couples in England which means they understand the needs of the people. Charles fell out of favor the moment he split from Princess Diana and then the people lost all respect for him once he turned his mistress of 30 years, Camilla Parker-Bowles, into a royal wife.

Prince Charles is at peace with the decision but the wrath of his wife, Camilla Parker-Bowles, is huge and her drinking has been completely out of control. While William and Kate find a level of peace in what comes next, Elizabeth insisted that Charles cart Cami to India to dry out. Their 9 day goodwill mission was more about sobering her up than anything else!

Does President Obama believe that Oprah Winfrey can save him in the poll of popular opinion? Well according to GLOBE, who always has it’s eye on the political fishbowl, he seems to believe that Oprah may somehow help to restore his name and credibility – both of which have taken a hit.

Elvis’ evil stepmom, Dee Presley took awful secrets to the grave and this week they are revealed in GLOBE. Even more shockingly, GLOBE reveals that a new book claims that mass murderer Charles Mansion has come out as gay.

GLOBE will stop at nothing to bring its loyal readers the best stories each week – investigative news reporting that you just can’t get anywhere else. Grab yourself a copy of the Dec. 2nd print edition of GLOBE which is on newsstands now for these huge stories above and more of the magazine’s unique style of entertainment reporting.  In the meantime, do you think it’s in Charles’ best interest to step aside and let his son lead? Tell us your thoughts in the comments below!